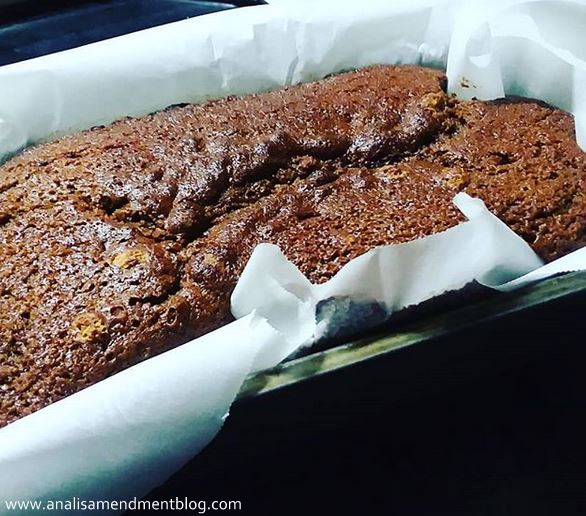 If you know me in person and see me around the holidays, you’ve probably had my homemade gingerbread.

This past week, a recent work project ended. I baked a couple of loaves and brought it in to thank the firm for the warm welcome.

This morning, I baked another loaf to bring for Thanksgiving dinner later today. Gingerbread has been my signature holiday dessert for over 20 years. At this point, it’s part of my identity. I bake gingerbread.

I first found the recipe in a magazine that my maternal grandmother gave me. It’s called Mother’s Gingerbread and is from the book  Cleora’s Kitchen. Over the years, I’ve adapted it. So it is somewhat different from the original.

It’s one of my favorite things to eat and most other people love it too. So I often give it as a gift. It’s easy to make and maybe you might like to bake it too. Here’s the recipe below.

INSTRUCTIONS:
Place parchment paper in loaf pan or grease pan with butter, then shake flour in pan until the pan is covered with flour. Dump out excess flour. Set oven to 350 degrees.

In large bowl, combine butter and sugar. Stir in molasses and eggs. Stir in cinnamon and ginger. Stir in baking powder and baking soda. Stir in flour. Stir in water. This should be a very liquid mixture.

Pour mixture into loaf pan. Depending upon your oven, and maybe the pan that you use, bake for 60 – 75 minutes. When the gingerbread is almost done, you should smell it. The scent is amazing! Sometimes I’ll bake it at night, so I can fall asleep to the wonderful aroma in the house.

Use a toothpick or fork, etc., to test it before removing from the oven. It should come out clean. If there is some liquid on it, then put back in the oven.

When it’s finally done, let cool for a few minutes. I usually wrap it in foil and store it in the fridge if I am keeping it. It’s great served warm with vanilla ice cream or whipped cream.

It can be frozen as well. Usually I make gingerbread to give away or bring someplace else, so I don’t refrigerate it. Just keep in foil and bring with you or package it well in order to mail. It will remain fresh and moist even in the mail for  2- 3 days. So choose your postage accordingly!

Happy Thanksgiving and all the best to you for this holiday season! 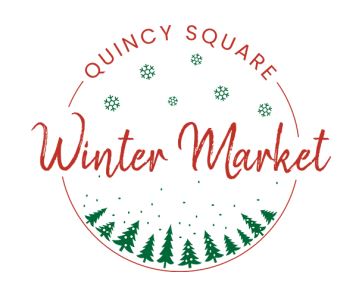 It’s hard to believe it’s that time of year already, but Happy Holidays! Next week is Thanksgiving and it’s quite late at that.

I was so happy to learn that Quincy is going to have its own winter market! While I didn’t grow up in Quincy, I’ve lived here for so long that it’s definitely one of my hometowns.

This city is growing and changing in so many ways. Having a winter market where we can easily support small businesses is a welcome addition.

There will be live music on Fridays and Saturdays and a Beer Garden by Widowmaker Brewing each day!

I hadn’t looked at that 2007 post in years. Reading it again now, I noticed my disappointment in Pelosi’s refusal to consider impeaching President Bush. Impeachment was “off the table” as far as she was concerned.

Well, here we are again. Almost 12 years ago to the day. Same Speaker. And shockingly, an even worse president. And that’s saying something. Looking back, Bush doesn’t seem quite as horrifying as he did back then.

I don’t believe that will be the case with Trump, if this country survives as a Democracy for 12 years to look back on with a different president. The horrors his administration has inflicted are too many to name.

For now, let me just say that my heart is breaking for the atrocities being committed in this country. Not that unspeakable horrors against people of color is new in the United States. It’s literally what this country was founded on – the theft of Native American lands and the genocide against Native American people. Then the kidnapping and enslavement of Africans for centuries. Just last century during World War II, the property of Japanese Americans was stolen and they were rounded up and placed in concentration camps.

No. This country does not have a good human rights record. And I am skipping over a lot. But we are supposed to do better. Now it is brown immigrants from Mexico and Central America who are seeking asylum after fleeing violence, that are being rounded up and placed in concentration camps.

The news that I read each day about the people being held in detention shakes me to the core. I have cried over this. We have concentration camps on our soil. The treatment of these men, women, children and babies is deplorable, cruel and seem to be crimes against humanity.

I understand that there is virtually no chance that the Senate would convict and remove President Trump. But I still think that an impeachment inquiry in the House should begin. Please start the process. At least there will be televised hearings, so that more people in this country will see the reality of what is happening.

Soon after President Trump was elected,  I remember hearing that his team was looking into the Korematsu decision. Between that, Trump’s greed, racism,  lawlessness and the growth and profitability of private prisons, I thought that there could be concentration camps here. It was only a matter of when and who would be in them. Now we are here. I don’t know how we fix this, but as I prepare for the 4th of July, I am taking the words of the Declaration of Independence to heart.

“We hold these truths to be self-evident, that all men are created equal, that they are endowed by their Creator with certain unalienable Rights, that among these are Life, Liberty and the pursuit of Happiness.–That to secure these rights, Governments are instituted among Men, deriving their just powers from the consent of the governed, –That whenever any Form of Government becomes destructive of these ends, it is the Right of the People to alter or to abolish it, and to institute new Government, laying its foundation on such principles and organizing its powers in such form, as to them shall seem most likely to effect their Safety and Happiness.”

I live in Quincy, Massachusetts and today visited a memorial to John Hancock, stating that he was the first signer of the Declaration. He was born here. Just a few miles away from where I am writing now.  I understand there is much hypocrisy involved with the Declaration. I am a black woman and my rights and humanity would not have been acknowledged at the time of the signing. But we are supposed to be better than that now.

For the love of God, please use your power to ease the suffering of those who have fled violence to come here looking for safe haven and are now essentially being tortured. I beg you.

Current events may have many of us contemplating a bit more about what it means to be American. So much happening in this country is heartbreaking, unnecessary, and to be frank, criminal.

But it doesn’t have to be this way. We the people can make a difference in very tiny ways. Even if only calling our House Representative and Senators to tell them how we feel. If we each do something that resonates with us, we can make this country better than it ever was.

Along with fireworks, picnics and barbecues, on this July 4th, it’s the perfect day to reflect on this nation’s founding — and think about how we can reset, striving towards a more perfect Union. 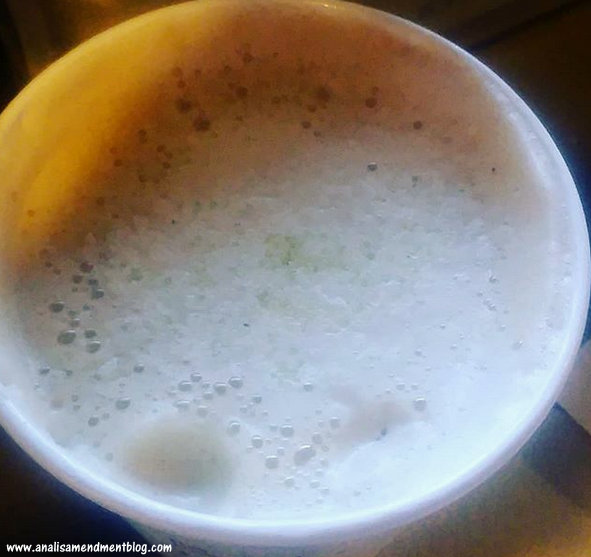 You may have heard all the fuss about Starbucks new holiday drink — the Juniper Latte.

Our signature espresso and steamed milk mingle beautifully with juniper syrup. This beverage has a light, pine-like flavor with delightful citrus undertones. We cap this latte with velvety foam and accentuate the remarkable flavor with a dusting of pine-citrus sugar.

As soon as I read the description, I wanted to try it. Then I started looking for reviews on Twitter to get an idea of how people liked it.

Opinions were all over the place and frankly I was confused. So many of  comments were about it tasting like gin. Gin?! What?! What did juniper flavor have to do with gin?

Let me tell you. I was today years old when I learned that juniper berries are used to make gin. Learn something new everyday! Researching this post is how I found out! I’ve never been a fan of gin. I’ve had it in a few cocktails, but never go out of my way to drink it. I’ve never bought it and probably never will.

From what I could differentiate of the flavor in mixed drinks, gin seems to bring the flavor of what it’s mixed with down a notch and make it more dry. Why would I want to do that? I prefer the opposite. More flavor and sweeter!

Luckily, I didn’t learn about the gin connection until after I had already tried the drink. Otherwise I might have opted out.

So what did I think? I liked it! It was sweeter than I thought it would be. The flavor was understated. Think about the smell of a pine tree and the sap that you see dripping down the tree. Imagine what that would taste like. Then take it down a notch. That’s the flavor. Just the right amount of Christmas tree. I’ll definitely buy it again.