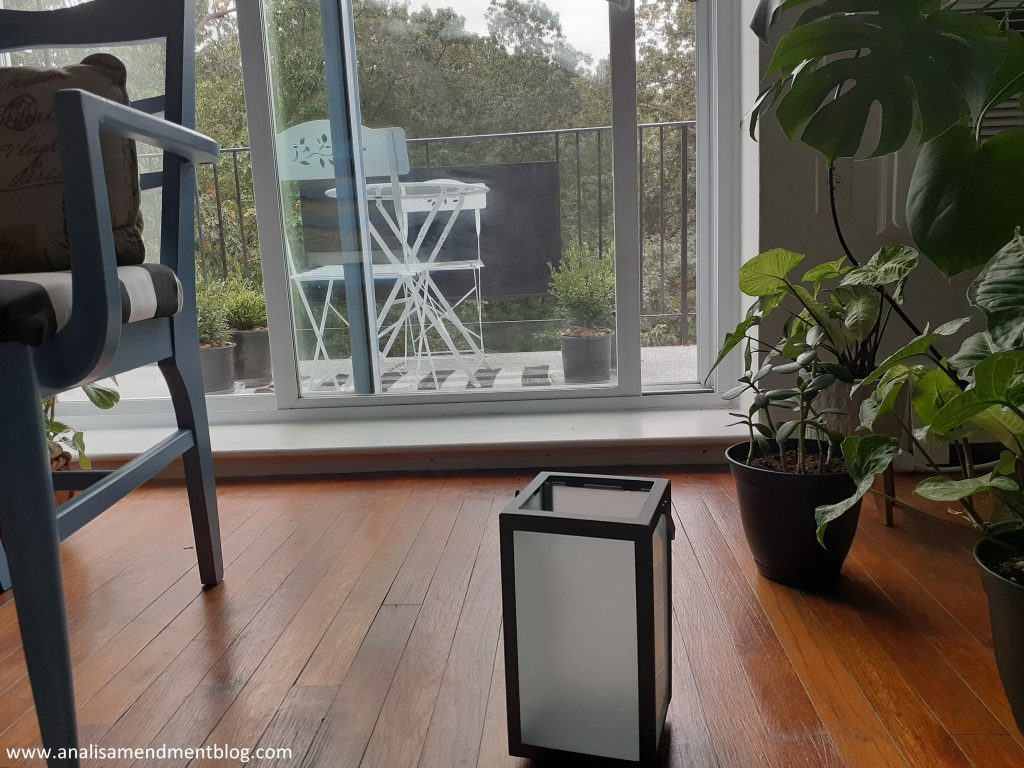 No more boxes! I’m officially unpacked and settling into the new place. It’s been just over three weeks since I moved. Things are still being arranged and it will take a while to really be used to being here, but it’s feeling like home.

I’ve always wanted a balcony and finally have one! The unseasonably warm temperatures provided a bit of time to sit outside, enjoy the space and the view. The balcony faces lots of trees, so it’s like I’m looking at my own tiny forest!

Overall the place is bigger and the layout is better, but the kitchen is smaller. Can’t have it all! But I’m making do and figuring out what works and what doesn’t. Then I switch up the way I’m using the space, so it’s more comfortable and efficient. I moved the coffee maker around a few times, but think I found a place that works. It was such a relief when I finally found it in the mess of boxes at the beginning!

Even though I’m still in Quincy, I’m in a new zip code! Goodbye 02170 and hello 02169! Before I was closer to Milton and now I’m closer to Braintree. It’s nice exploring new places, especially the food related ones!

As much as the world can be full of turmoil, it feels good to create a sanctuary at home. I’m very grateful. 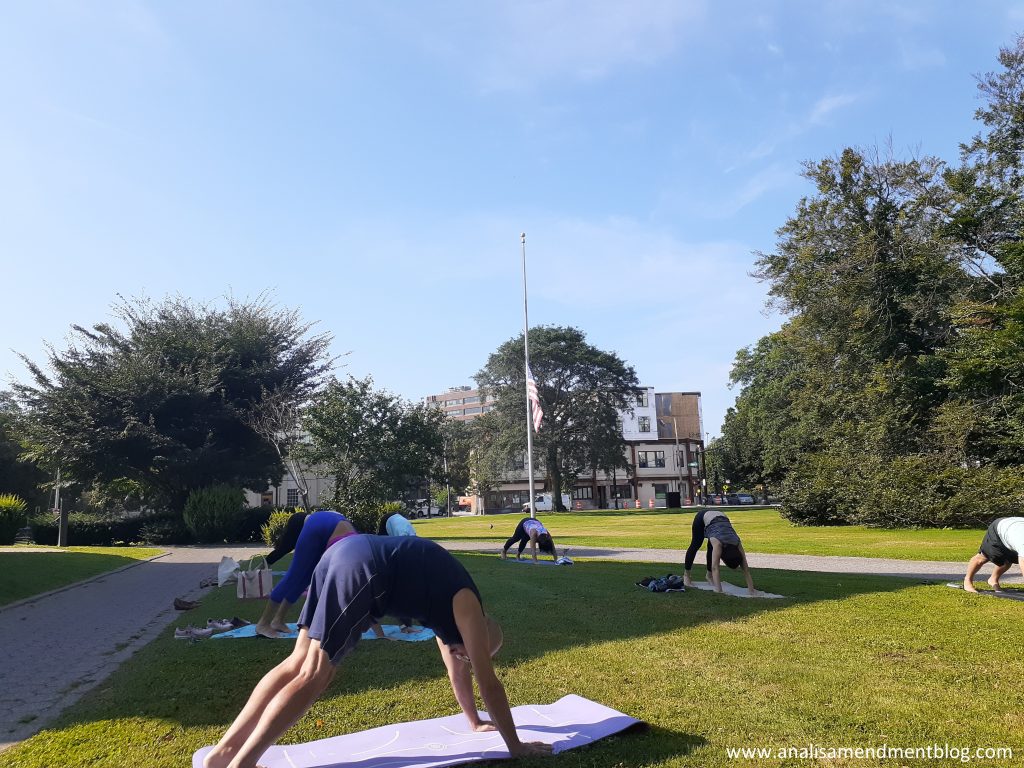 Over the years, I’ve read about many free yoga classes at public libraries in Massachusetts and in other states as well. This morning, I was finally able to attend a free yoga class right here in Quincy, outside on the lawn at Thomas Crane Public Library. This class was the first in a series of community classes taking place each Wednesday morning in September on the library lawn.

It’s hard taking pictures and enjoy the relaxing vibe, but I managed to snap a few.

There was a nice breeze — and lots of bees. Four or five bees hovered over blades of grass in front of me. A few ants made their way onto my mat too, but no stings or bites!

I was beneath a large tree, so there was some shade and bright sun streaming through the branches. There was a mostly clear blue sky with a few wispy clouds floating by. Even though the class was in the morning, it was warm and a tiny bit humid. Perfect weather and a reminder that summer is still here.

There was a good turnout and new arrivals kept showing up through most of the class. We were mostly an older crowd, but there was young woman who arrived towards the end with the cutest little girl. They both got on their mats and dove right into their practice.

From conversation I heard, a few people said this was their first yoga class. Our teacher, Rhiannon Skolnick of Humble Roots Yoga, was enthusiastic and has a gentle soothing way about her.

This might have been my first yoga class since the pandemic started. Possibly the second, but the first this summer. Because I’m vaccinated now and there was a lot of space to spread out on the library lawn, I felt comfortable not wearing a mask. Hopefully the weather will cooperate next week for another wonderful class. 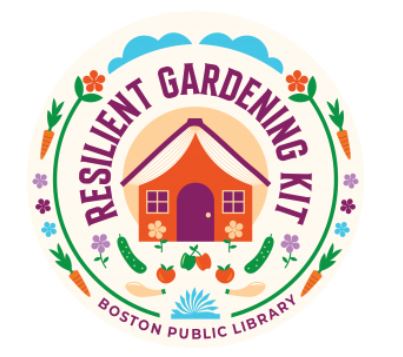 A few years ago, I remember reading about seed libraries and thinking that it was a wonderful idea for those interested in gardening. The idea has taken off and you can probably find one near you or even start your own.

What is a seed library? Pretty much what it sounds like. It’s a place, like a library, that shares seeds with people in the local community. The specific rules may vary from place to place, but you can generally get seeds for free or at a low price.

Food is delicious and fun. But it’s also a necessity for life and therefore political. There is enough food for everyone, but everyone doesn’t have enough. Systems in place need changing.

As we leave the pandemic, more of us are thinking differently about life and welcoming systemic change. This week I had my second COVID-19 vaccine, so I’m looking forward to normal life again. However, I’m hoping the new normal is better than the old one.

Seed libraries provide the literal seeds to grow our own gardens. Starting on May 5th, gardening kits were available from the Boston Public Library – 850 kits spread out among the branches.

You can choose from two types of gardening kits. Resilient Gardening Kits include everything you need for a veggie garden. For those with a focus on herbal remedies, Herbal Wildflower Kits contain what you’ll need. Take a look at the BPL website for more information on how to pick-up your kit. I’m not sure how long these will last, therefore, it’s probably best to go sooner than later. Happy planting! 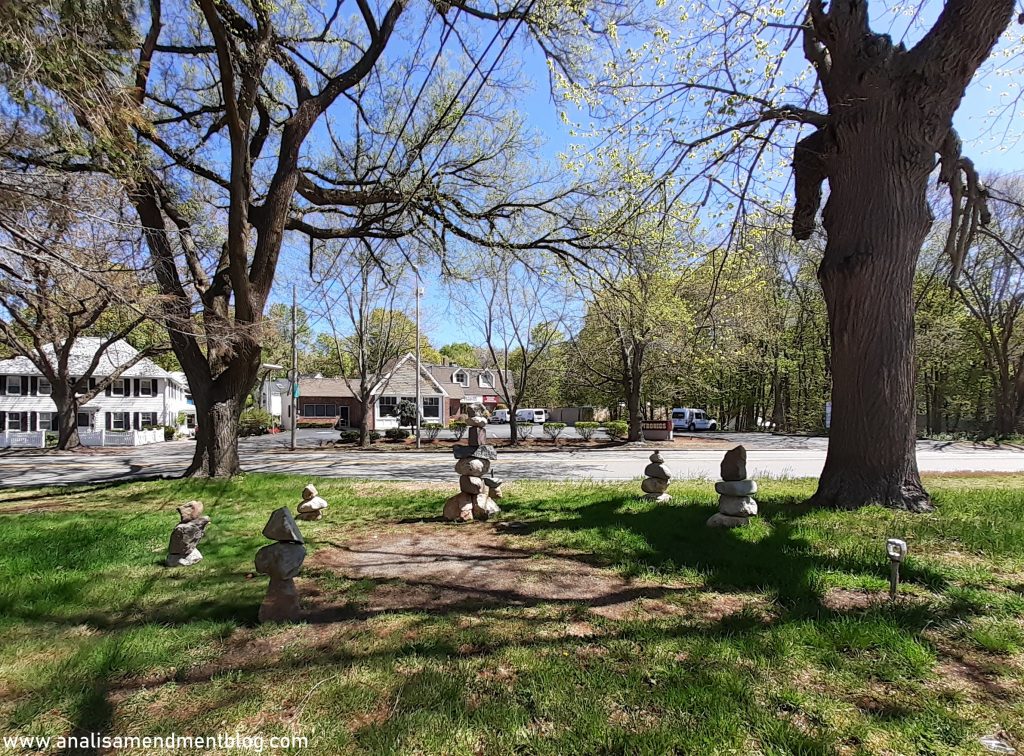 During these pandemic times, while driving to the highway, on the side of the road, I noticed a series of stones in front of a house. Over the last several months, the order of the stones has changed. They started piling up and forming a circle.

Huh. Something was going on here. I wanted to take a closer look. Yesterday, I had the time and the weather cooperated. So I pulled over and took some pictures.

Who did this?! There’s a mini Stonehenge here in Quincy! I love a good mystery and this has grabbed my attention.

While Quincy’s Stonehenge lacks the grandeur of the original in England, something and someone is behind it. Has the pandemic inspired someone to reflect on Quincy’s famed granite industry and pay hommage to it? Or maybe they’re just bored and wanted to try something new.

My time travel loving self imagines it’s a portal to an alternate reality. If I stood in the center of the circle, on the night of a full moon, danced around a bit with magical intentions and touched a stone, maybe I would go poof! Just like in Outlander — traveling to the past or maybe the future. Because my logical mind will overrule the urge to find out, I’ll never know. 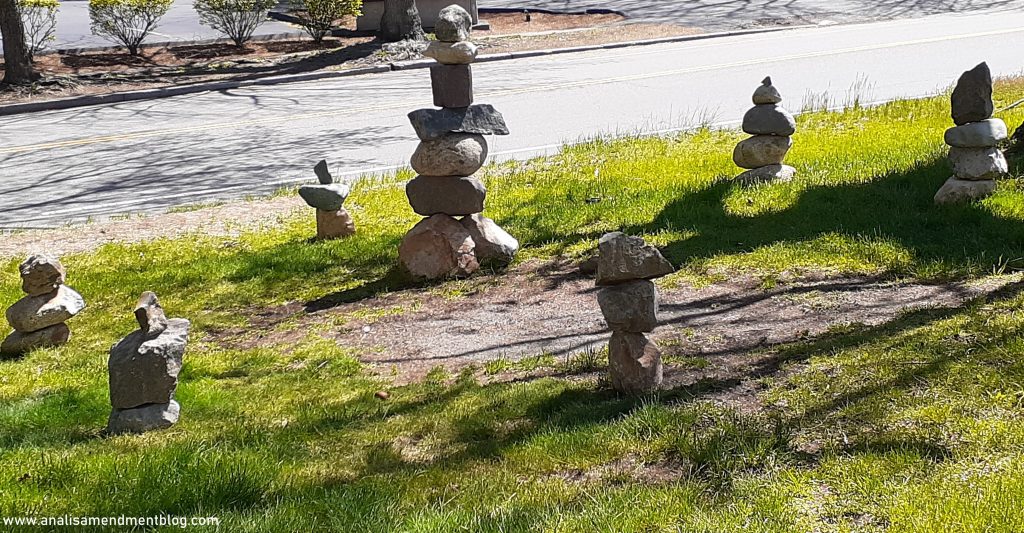 I’m not sure if this is the final arrangement of the stones and I’m hoping the display continues to grow.

Next month brings the summer solstice, which is connected to Stonehenge. The person or persons behind this monument of stones could have something more planned. Maybe, just maybe, there will be dancing around these stones yet. But at sunrise on June 20th.

Last week, while looking through photos at my mother’s house, I found this rare gem. A picture from 50 years ago!

Since my father’s passing in 2018, it’s especially nice to find “new to me” old photos of him. And this one is for the history books. He’s with then Boston Mayor Kevin White.

I’m not sure exactly what the occasion was for this photograph, but it must have had something to do with his work as a Boston school teacher. He taught in the Boston Public School system for more than 20 years. Writing found on the back of the picture gives the names and date.

The timing of finding this picture seems especially poignant. Sometimes it feels like overall not much changes in the world. But it does. Step by step.

The week that I found this picture, showing one of Boston’s most influential mayors from last century, Kim Janey made history as the city’s first woman and first Black mayor of Boston. Janey is the 55th mayor and White was the 51st.

And the way it happened was completely unexpected! I remember being so excited when Michelle Wu decided to run for mayor back in September. Then just weeks later, Andrea Campbell put her hat in the mayoral ring. Boston could have a woman of color as mayor!

Then several others decided to run and there’s been speculation about even more. With so many people, it wasn’t as exciting anymore and I was over it. After all, I don’t even live in Boston, so I wouldn’t actually be voting.

But then, out of the blue, President Biden tapped Mayor Walsh for Secretary of Labor. Suddenly, we have a Black woman becoming mayor during Women’s History Month. And the mayoral election had nothing to do with it. Plot twist!

When the time is right, change happens in ways we can never imagine. Like the way the first woman mayor in the United States was elected back in 1887. It was supposed to be a cruel joke — only Susanna Madora Salter won.

My father loved politics and was quite the conversationalist. When a major event happens, I always wonder about conversations we would have had. Which makes me think even more about this picture.

Since the opportunity presented itself, I’m sure my father must have said something to Mayor White. I can only imagine. But on that day back in 1971, Mayor White got the chance to have a conversation with Thomas Johnson. Which is something that I now miss everyday of my life.