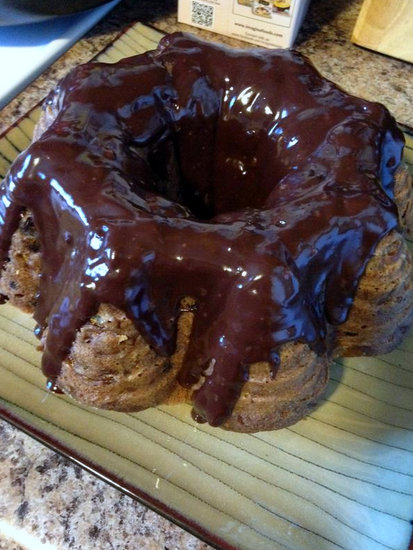 I like a nice surprise. Especially, when it involves food. Even better when it’s dessert. And a chocolate dessert at that.

Now I wish that I could say that this actual cake was presented to me as a surprise and I got to eat it. Not quite. But I did get the next best thing. A surprise tweet!

Five years ago on the old blog, I gave away a festival bundt cake after having won a set of three Nordic Ware Bundt pans from Courtney. I didn’t need to keep all three. Edi was the lucky winner.

I hadn’t thought much about the pan since. Out of the blue this week, Edi showed me a picture of the Chocolate Chip Zucchini Cake with Chocolate Ganache that she baked! Thanks to a comment below by Candelaria, Edi is sharing how she made it, so we can all try.

I’ve made the cake twice and it turned out great both times. I’ve never put nuts in it. The first time had no frosting. I’ve made no other alterations to the recipe.

I used Ghiradelli chocolate chips. I could not find out how many ounces were in the bag, but it’s the typical size bag. I used those leftover after measuring out what I needed to make the ganache frosting.

I only made half the recipe.  I used half and half and a little butter, a little vanilla extract. Enjoy!

So nice to see that the pan has found a happy home and is being used! Now I have been reminded that I haven’t used the pan that I kept!

By the end of this year, this must be remedied! There hasn’t been much baking here and I think it’s time to create some new recipes. Stay tuned!