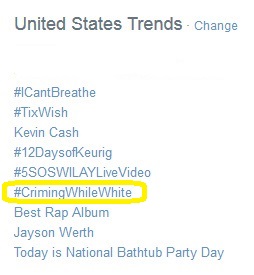 Some don’t like the hashtag #CrimingWhileWhite. But I think it’s a good way to shine a light on the disparity in treatment by the justice system between whites and people of color.

This hashtag immediately came to mind as I read The Week’s article stating that Mark Wahlberg should not receive a pardon from the Commonwealth of Massachusetts. Wahlberg filed a pardon petition last month. The audacity.

The article gives details of the events that resulted in a criminal conviction. I was surprised, because it seemed like a hate crime to me. His Wikipedia page discusses more and it is all rather disturbing.

I won’t write the details here; you can take a look at both articles on your own and decide whether to believe them or not. However, beating two Asian men severely while shouting racial epithets at them is horrifying to say the least. Whether Wahlberg was drunk or on drugs is not an excuse.  One of the men lost sight in one eye. Wahlberg spent 45 days in jail.

Part of the reason reading about this has upset me so much is the timing of it. The racial climate in this country at the current moment is tense to say the least. Not that there are no injustices happening to other people, but foremost on my mind are the recent grand jury decisions and the differences in treatment in this country based on race. I recently read an article about a black man who spent decades in prison for a crime that he did not commit. That was just one article, but it is story that has been repeated over and over.

The law is so harsh to people of color where it can often be quite kind to white people. Thus #CrimingWhileWhite. The stories are being told tweet by tweet.

Apparently Wahlberg thinks it was perfectly fair that he only served 45 days in jail for his crimes. The audacity. If he had been black would he have received that kind of sentence? I really don’t think so.

While Wikipedia cannot always be believed, the entry about him says the following.

“I did a lot of things that I regret, and I have certainly paid for my mistakes.” He said the right thing to do would be to try to find the blinded man and make amends, and admitted he has not done so, but added that he was no longer burdened by guilt: “You have to go and ask for forgiveness and it wasn’t until I really started doing good and doing right by other people, as well as myself, that I really started to feel that guilt go away. So I don’t have a problem going to sleep at night. I feel good when I wake up in the morning.”

I do believe that we have to move past our mistakes and go forward with our lives, but wow…. Why hasn’t he found the blinded man and tried to make amends? Has he been compensated? I would think that given all the money that he has made and how his mindset has changed that he would want to apologize and give the man some money. Maybe he has and the article did not include that. I sure hope so.

To ask for a pardon seems like a lot for me. He basically got a pardon with just 45 days in jail. Others would have served years, maybe decades or life. Wahlberg was able to enjoy his youth, his freedom and become the best version of himself. He received a valuable gift.

As much as I detest his crimes, I admire what Wahlberg has done with his life. He has made the most out of it and is doing more good with his foundation. He is giving back. He has brought great joy to many with his music. Including me. Who hasn’t found themselves bobbing their head to Good Vibrations?

With his Massachusetts restaurants Alma Nove and Wahlburgers, he is bringing jobs and good food to the local economy. I’m certainly not against any of that.

But how do you balance so much good with the atrocities? Maybe the balance is leaving the conviction on his record.

I think the world is probably a better place having Wahlberg as he is now rather than being behind bars. He got a second chance. Many others deserve to as well, but never get it. Refusing the pardon, might make sure that Wahlberg never forgets just how truly lucky he is.

*Updated 12/11/2014* This story is developing. A Daily Mail article says that the man who was attacked, Johnny Trinh, forgives Wahlberg and has just now learned of his fame. Also Trinh says that he lost his eye before he was beaten by Wahlberg. The initial injury took place during the Vietnam War. It’s quite an in-depth article and worth reading.

*Updated 12/17/2014* Here are two more articles with information: Back In The Day: Marky Marks Rap Sheet  and Reminder That Mark Wahlberg Allegedly Threw Rocks, Slurs, At 4th Grade Class in 1986

*Updated 9/15/2016* Was happy to learn that Wahlberg now regrets asking for a pardon and the pardon request has been closed. Also, he did meet with Trinh and apologized to him in person.

2 thoughts on “The Audacity of Mark Wahlberg”