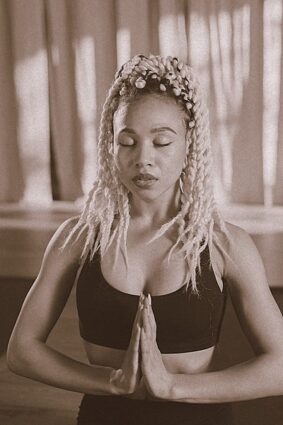 The casual way George Floyd was murdered adds to the horror of it. The rawness of it. It was pure bloodlust. The police officer extinguished Floyd’s last breath in a way that seemed so mundane to him. As if he were wringing out a sponge after doing dishes. That’s the coldness of a serial killer. That’s the end result of systemic racism — going back to when Black people were enslaved in this country.

We were considered property, not human beings, so the owners could do whatever they wanted to a Black person’s body with no consequences. Think about all the permutations of what that meant over generations. Our bodies were not our own.

I’ve felt hurt. Angry. Sad. And have been meditating more than ever, as a way to stop thinking about the current reality for a bit and gather myself.

Recently, I heard the word remember broken down —  “re” and “member.” Meaning to put oneself together again. I found meditation through taking yoga classes and find both perfect ways to center myself and gather strength. To remember myself.

Yoga is such a powerful tool for wellness. The term wellness gets thrown around a lot and seems to have different meanings to some. The World Health Organization glossary defines it as follows.

Wellness is the optimal state of health of individuals and groups. There are two focal concerns: the realisation of the fullest potential of an individual physically, psychologically, socially, spiritually and economically, and the fulfilment of one’s role expectations in the family, community, place of worship, workplace and other settings.

Wellness moves beyond physical health to become more holistic and include every aspect of being human. In order to achieve wellness, especially as Black people, we also must heal the wounds of racism. Not just current racism, but intergenerational racism that traumatized our ancestors.

Our ancestors found ways to cope within a racist society and passed down those coping mechanisms to their children. Their children did the same and the cycle repeats. Those of us on journeys of healing are becoming more conscious of the ways that racism has caused us harm.

Meditation allows us to go deep and start reckoning with how to move forward and deal with things differently. Like most Black people, I have dealt with racism in the past and obviously continue dealing with it now.

At the end of last year, I reached a tipping point. I only have so much time and energy and dealing with racism is exhausting. It wears you down. As a Black woman, dealing with sexism on top of it is even more exhausting. In the past, I have let a lot of things go. One particular incident in the past, I regret not having addressed head on.

During law school, I had a co-op at a law firm here in Boston. I loved the work I was doing — ironically enough, researching property and land use. My supervisors were happy with my work too and wanted me to interview for an associate position. I had never intended to take the traditional law firm route, but I was interested.

Very soon after hearing this news, one of the white male attorneys at the firm, not anyone that I had worked with directly, made an off-hand comment to me about how affirmative action hires aren’t qualified. I would have only been the second Black woman attorney at the firm.

I was so shocked – like a deer in headlights. I don’t remember if I said anything back to him. I ended up not working at the firm, which no longer exists, but I didn’t tell any of my supervisors about what happened. Nor did I mention it to anyone in the school administration until much later.

Another incident happened on a different co-op that I also never mentioned to anyone. I was treated to a nice lunch celebrating the end of my co-op. I was the only woman and the only Black person in our small group. One of the men was talking about working in Africa, then casually mentioned all the sex he had while there. They all laughed. I was so uncomfortable. I don’t know that any of them noticed or cared about how the statement might have impacted me. These incidents were back in the mid-90s, but I still remember how I felt.

Late last summer, I was at a small public lecture. During the talk, I was rather dramatically singled out for being the only Black person there. I couldn’t believe it. I was like a deer in headlights — again. I didn’t say anything to anyone while I was there, but kept thinking about it. I only told a few people afterwards and was still upset.

A few months later, I was working on a new project and there was an incident where training for new employees went awry with a racist statement during the presentation. I wasn’t there, but learned of it after an email went out apologizing to everyone for the incident and strongly denouncing it. It was addressed right away and the way things played out, it made me wonder if I should say something about what happened to me at the lecture. Maybe I needed to give them a chance to do better.

I decided to say something. Maybe the organization would make some changes and nothing like this would happen to anyone else. At the very least, I wouldn’t have the ongoing regret that I didn’t say anything.

On a Friday night, I sent a very detailed email to the organization and heard back by early the next  morning. They apologized profusely and I later spoke with leadership about my experience. Training was going to be implemented along with other changes in their organization.

These experiences I’m sharing here are just the tiniest amounts of racism that I’ve dealt with in my life. I’ve been spit on and called the N word. If I reacted to everything all the time, it would take up too much of my life. That’s the same for most Black people. We just want to live our lives like anyone else. We want to rest like Breonna Taylor. We want to go jogging like Ahmaud Arbery. We just want to live and enjoy wellness.

Hopefully, sharing my experiences here might help someone see things from a new perspective. Even if it’s only one person, that’s enough. Black lives matter and I’ve been sharing mine by blogging since 2006. Being a blogger has coincided with finding yoga and meditation. I’ve learned to focus on my breath and how it’s something I can always depend on.