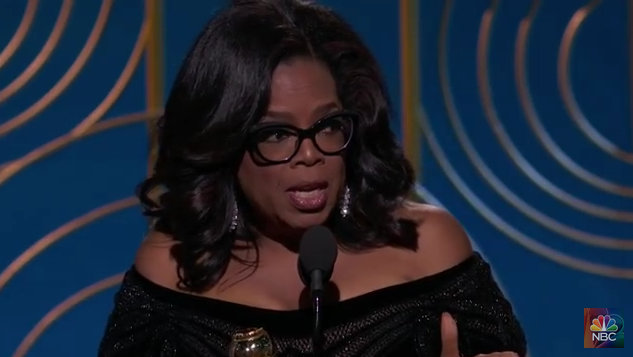 When I was reading about the planned activism for the Golden Globes last night, I read that this was a movement, not a moment. From #MeToo to #TimesUp, things are definitely changing.

But I absolutely believe there are specific moments in this movement. Oprah Winfrey’s speech last night was one of them. It was part teaching moment, part rallying cry, celebration, gratitude and memories.

It was everything. It was so much that I don’t think any of us really know what it was. Yet.

It was the type of speech that needs to be read multiple times [here is the text]  watched repeatedly, studied and looked back on.

In the future, when we look back on it, maybe we will understand the nuances based on what comes after. My blog has given me many gifts. One is the gift of perspective. I can look back and see myself growing and changing through my writing. This is why I keep blogging.

I can also see changes beyond me. Changes where I live, in this country and the world. Only time let’s us see things from a distance, along with keeping a written record of the present.

Merely reading the words doesn’t do the speech justice. The same words gather energy and intention based on her inflections.

These two passages below resonated the strongest with me. And I think with the audience as well. Seeing peoples’ reactions was just as powerful. Oprah truly moved the crowd. And a nation.

I’ve interviewed and portrayed people who have withstood some of the ugliest things life can throw at you, but the one quality all of them seem to share is an ability to maintain hope for a brighter morning, even during our darkest nights. So I want all the girls watching here now to know that a new day is on the horizon.

After this speech, many have said that Oprah will run for President in 2020. People love the hype of speculation and jump to conclusions over anything she does. I hope that she would want some government experience first. At least a run for Senate.

And to be truly honest, I have been very disheartened by her lack of speaking out against Trump. The last that I heard her mention about him was right after the election, when she said that we should give him a chance. That was like a punch in the gut. I was shocked.

The #MeToo movement reminds me that we don’t really know the stars that we admire. They are just people who happen to be famous. It’s hard, because their art can inspire so much emotion. Nobody should be put on a pedestal.

I have admired Oprah for decades. She’s only human too. People we love and admire will eventually disappoint us. Nobody is perfect.

So I cannot speculate about what Oprah will do next. All is know for sure is that her speech last night was a moment to remember.