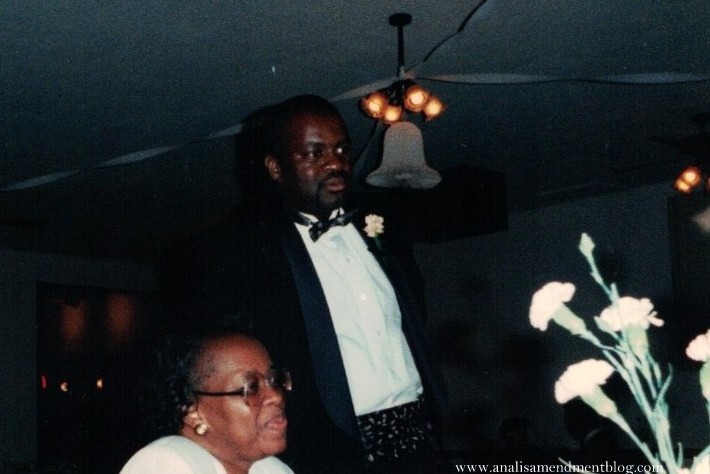 My paternal cousin Marshall Johnson died this past week. It was way too soon. He was way too young. This picture, from much happier days, shows him with his mother at our cousin’s wedding.

He’s with his mom again now and his father. Along with many aunts and uncles, including my father. And some other cousins who died even younger.

When my father died and my mom and I went to the hospital right after, Marshall was there with us. He was there for all of us in my immediate family many times before and many times after. How do I describe such a big presence?

It’s Valentine’s Day, so maybe the best way to talk about him starts there. With love. The day usually focuses on romantic love, but it’s also about love for family and friends. Marshall had a big heart.

I mean he would go big with invitations and bring everyone into the fold. There would be lots of food, music and an atmosphere of fun and joy. Big gatherings were his thing – backyard barbecues, picnics at a Boston area parks, Super Bowl parties, birthday parties. All kinds of parties. He loved to party!

I have to admit, as an introvert, sometimes the sheer number of people that could be anticipated would be overwhelming to me. I attended many of the gatherings, but not all of them.

Something that I learned and especially appreciated about him over more recent years was that he would truly see and celebrate you as an individual. It didn’t always have to be a big event.

When I got a food writing gig with WGBH, I was so excited! And so was Marshall! He was genuinely happy for me and wanted to celebrate my win by treating me to dinner. I chose Myers + Chang and we had a lovely time.

I thought there would be more time with him. It’s a small circle of people who’ll celebrate your wins and be there at times of extreme loss too. My father was one. Marshall was one. My heart hurts losing both of them so recently. It’s hard to process it all. Writing through it is a start.

Marshall had a lot of extreme health challenges over the last several years. But he beat so many and came back. He was so strong. His most recent health struggles were just too much. I hope he is at peace now. He can finally rest.