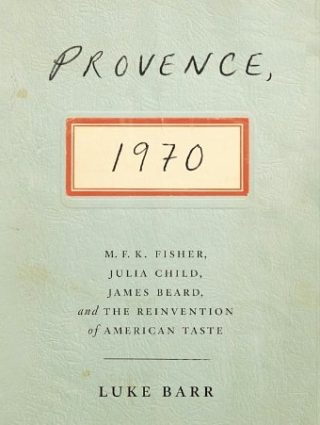 While looking at the new books section of the library, I happened to see Provence, 1970. The names immediately struck me and I was intrigued. The synopsis convinced me it would be good.

Provence, 1970 is about a singular historic moment. In the winter of that year, more or less coincidentally, the iconic culinary figures James Beard, M.F.K. Fisher, Julia Child, Richard Olney, Simone Beck, and Judith Jones found themselves together in the South of France. They cooked and ate, talked and argued, about the future of food in America, the meaning of taste, and the limits of snobbery. Without quite realizing it, they were shaping today’s tastes and culture, the way we eat now. The conversations among this group were chronicled by M.F.K. Fisher in journals and letters—some of which were later discovered by Luke Barr, her great-nephew. In Provence, 1970, he captures this seminal season, set against a stunning backdrop in cinematic scope—complete with gossip, drama, and contemporary relevance.

Great change never happens in a vacuum and no one person does it alone. So it was especially interesting to read about how these great food writers all knew one another. They worked together and socialized together.  As I was finishing up the book last night, I put on the TV to see what was on and happened to catch the last hour of Julie & Julia. What serendipity!

The book discusses how this rarefied circle of friends sometimes were not so friendly. We also see how the torch was passed with the introduction of Alice Waters toward the end. As I thought about my recent blog post on food writers of color, it made me consider how many food stories have yet to be written about.

One of the things that I found especially sad and surprising about the book is how James Beard was described. When I think of James Beard, I think of the awards and picture a very large and smiling figure. Everyone was worried about him. His love of food was killing him. He was trying to lose weight and was under a doctor’s care. His legs were swollen and his mobility was greatly impacted. Beard is so famous for the food he cooked and wrote about, but he suffered for it.

If you love food and food writing, then I highly recommend the book. Or even if you’re just interested in a slice of life piece. Learning about a very distinct period of time in a particular place.

We probably all can remember a certain time and place with good friends that we will never forget. That forever may have changed who we were at the time and led us to become who we are now. Or maybe was just a good time that now serves as a beautiful memory when we need it.

While the book describes a lot of food, there are no specific recipes. However, towards the very end, there is a very delicious sounding cocktail, on page 282, that is mentioned. I’d like to try it. Maybe you would too. So below is an excerpt in which the author describes part of his July 2010 trip to Provence.

Yet another old friend — we had a full house, even after my father and grandmother had departed the previous week — joined us in the kitchen and announced that he would be making a cocktail, a new invention in fact. It would be called “The Plascassier.” Into the blender went a basket of raspberries, fresh mint, lemon juice, and vodka. This liquid was poured judiciously into the bottoms of glasses, and then topped with Laurent-Perrier champagne.

It’s still pretty cold outside, but this sounds like a cool and refreshing summer drink that I can imagine adapting to suit my taste. Believe me. It will be blogged.