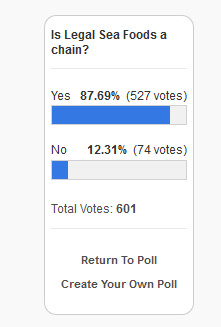 Have you seen any of the commercials that are part of Legal Sea Foods “Not A Chain” campaign? They’re rather clever. But after watching them, I can still only think, “Really? Thou doth protest too much.” As much as Legal’s doesn’t want to be considered a restaurant chain, it is considered a chain restaurant by many, if not most. At least according to this poll pictured above. Boston.com’s article, “When Does a Restaurant Become a Chain?” discusses this very issue.

For full disclosure, I cast a vote in this poll and said that I consider Legal’s a restaurant chain. When I took the screen shot of the results, there were 601 votes and 87.69% also considered it a chain. Also, at least at the time of this writing, if you look up Chain store in Wikipedia, there is a section for restaurant chains. Below is an excerpt with links removed.

A restaurant chain is a set of related restaurants in many different locations that are either under shared corporate ownership (e.g., McDonald’s in the U.S.) or franchising agreements. Typically, the restaurants within a chain are built to a standard format through architectural prototype development and offer a standard menu and/or services. …

Legal Sea Foods is listed as an example on the page right now, although I would not be surprised if their name is soon removed.

I remember when Legal Sea Foods was new and special, because you could only find it in the Boston area. Going to the Park Square restaurant was a really big deal. At least to me. The food was always wonderful. The service too. I haven’t been to a Legal Sea Foods in years, although I have planned to try one of their new concept restaurants. They do know how to keep things fresh! While their locations may be branded differently, they are still under the umbrella of Legal’s and part of their family. That is why it seems like a chain to me. Their restaurants are all still related.

Years ago, when I learned that you can find Legal’s restaurants not only outside of Massachusetts, but also outside of New England, I was a bit disappointed. They were no longer special to us in this region. One of the things that I love about travel is trying someplace that I cannot find at home.

If I’m in Florida or California, I generally don’t want to go places that I can find here in Massachusetts. Unless of course, I need a quick cup of coffee before my caffeine withdrawal headache starts and I can’t find a local coffee shop. Then I will go into a Starbucks.

What do you think? Do you consider Legal Sea Foods a chain? Have you been to one of their locations recently? Tried one of their new concept restaurants?

4 thoughts on “Is Legal Sea Foods a Restaurant Chain?”