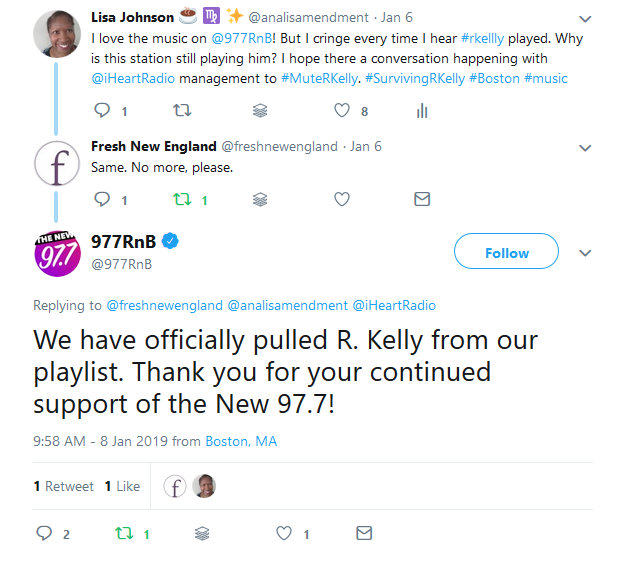 For decades I’ve heard the stories about R. Kelly. Allegations of his abuse of underage girls have only increased over time.

I don’t have cable, so I haven’t seen Surviving R. Kelly but many that I follow on Twitter have been watching it. From what I have read, R. Kelly is a monster with no conscious. I don’t understand how he has gotten away with so much for so long. Maybe now a turning point has been reached. The docuseries has been widely watched.

A ThinkProgress story about the success of the programs describes how part of the problem with R. Kelly is that people literally keep listening to him and not the victims.

What do we do with the theoretically singular and indispensable gifts of men who also happen to be predators? Among diehard fans of some artistic icons, a belief persists that the talent of one man is such a rare and precious resource that must be preserved at any cost. “Separate the artist from the art,” they advise. As if it were so simple, like the latter can be surgically extricated from the body that produced it so as to be cherished all by itself, stripped of its context and consequence.

But with Kelly, the idea of such clean division feels particularly absurd. His music — and the success it brought — lured in victims, charmed a distractible press, and enabled his reportedly prolific and ongoing violence. His art acted as a smokescreen and a bluff.

The #MuteRKelly Movement was started in July 2017 by Oronike Odeleye, when he started a petition to get R. Kelly’s music off the air in Atlanta. The movement has spread and more stations are taking his music off the air.

My favorite local music station here in Boston is The New 97.7. In the past they have played R. Kelly. I admit to enjoying his music over the years. It’s been a standard at parties and weddings for so long. Many of us have good memories tied up in his music. But this man and his music can no longer be celebrated. The more I learn about him, the more it feels wrong listening to him.

A couple of days ago I tweeted at the station and it’s parent company iHeartRADIO asking why they are still playing him and expressing my feelings about his music. Today I received a tweet in response stating, “We have officially pulled R. Kelly from our playlist.”

It’s not a huge consequence. But it’s something. And I’m very appreciative that The New 97.7 has taken a stand. We’re moving in the right direction.