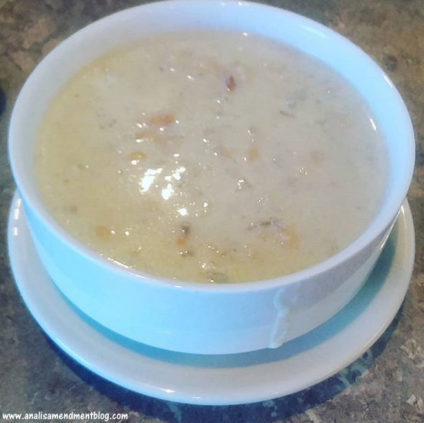 It’s been a while since I delved into the world of chowder. But The Chowdah Project is back!

My friend L lives west of Boston. I live just south, and usually we meet in Boston. This time when we decided to get together, I suggested going to her part of the state.

I mentioned that I’d like to try some chowder and asked about some local places. She suggested three, and we decided on Harry’s Restaurant. It’s easy to get to from Boston on the Pike and it’s close to the 495 exit for her. Plus, L said that she had gone by it a million times and always planned to go, but never did.

Harry’s has a great website, so all the information that we needed was easy to find. I was very intrigued by all the different types of chowders (clam, seafood, fish & corn) they have in addition to a variety of foods.

The menu and website invite you to try the food, the same way that you’re invited in person once you arrive – friendly in a way that feels comforting. It’s classic Americana and the type of place that you could return to over and over. I definitely want to go back!

Harry’s is a family owned restaurant that’s been operating since 1946. Not surprising either. The food is delicious! When I was posting pictures on Instagram, I received immediate positive feedback from someone who has been there many times.

So the chowder! L had the bowl of clam chowder shown above. She loved it! We both noted that it was the perfect consistency and had nice sized chunks of clams.

I had a cup of corn chowder. Perfection! It made me happy and I would get a bowl next time, so I could have more. So many big chunks of corn. Sweet creamy goodness.

I definitely recommend trying Harry’s for chowder and more!