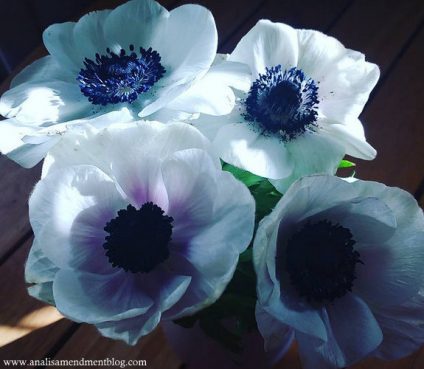 This is the first in a series of posts where I will list and link to a variety of things that I’ve been noticing. We are now in the Twilight Zone Trump Era. These posts may not be every week, but I’ll do the best I can to keep a good record.

This first list is longer than what I plan for future lists. I want to get a lot in here that we have been living recently and to give a feel for what’s been going on. I may not remember so clearly six months from now. Time feels like it’s moving at warp speed with all that has been happening.

In my Resist + Persist post, I wrote that I have been following Amy Siskind‘s lists. She says, “Experts in authoritarianism advise to keep a list of things subtly changing around you, so you’ll remember.” Otherwise we will forget. Her list for the 11th week is here.

Why the flowers? I bought them on Inauguration Day to treat myself. And something needs to be cheerful in these posts!

Also, flowers are given for seminal moments in our lives — births, deaths, graduations, anniversaries, etc. We are at that kind of moment in our nation. In my Breathe & Push post, I quoted part of a speech by Valarie Kaur.

And so the mother in me asks, what if. What if this darkness is not the darkness of the tomb? But the darkness of the womb? What if our America is not dead? But a country that is waiting to be born. What if the story of America is one long labor? … What if this is our nation’s great transition? … What does a midwife tell us to do? Breathe. And then push. Because if we don’t push we will die. If we don’t push our nation will die. Tonight we will breathe. Tomorrow we will labor.

If all that we are going through now is a push into a new and better nation, then it is a death and birth. We all deserve some flowers. So here goes. 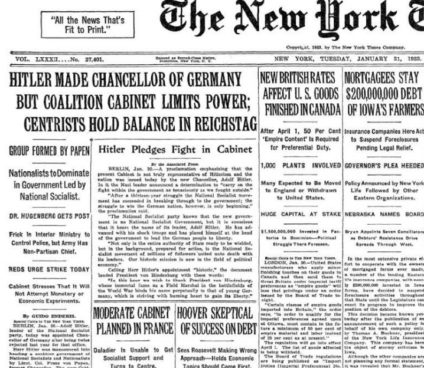 ~ So many comparisons between Trump and Hitler have been made. This 1933 New York Times front page article discusses the cabinet limiting Hitler’s power.

~ Nazis are in the news all the time. There is debate whether it is right or wrong to punch them in the face.

~ The White House Holocaust Remembrance Day statement did not mention Jews or anti-Semitism. It was likened to Holocaust denial by many. The U.S. Holocaust Museum issued a statement in response, stating in part, “Millions of other innocent civilians were persecuted and murdered by the Nazis, but the elimination of Jews was central to Nazi policy.”

~ There is a Resistance Manual, which states, “Together, we can harness the collective power of the people to resist the impact of a Trump presidency and to continue to make progress in our communities.”

~ A new website called 5 Calls makes it easy to contact our government representatives and voice our opinions.

~ The Indivisible Guide is a guide showing how to resist the Trump agenda. It was created by former congressional staffers and shows the best way to make our representatives listen to our opinions.

~ The Women’s March took place in Washington, DC, and in other cities across the country and the world the day after Trump’s inauguration. The march was to show support for those groups denigrated by Trump and his agenda. The organizers returned to Washington to protest Sessions and will continue to advance their political goals in the future.

~ Companies are changing the way they announce jobs in response to Trumps tweets and untrue statements about job creation.

~ Is the surge in progressive activism because progressives are the majority?

~ Trump issued an Executive Order for the construction of the Dakota Access Pipeline (DAPL) to continue. There are Standing Rock Legal Defense funds to support in order to help the protesters and stop the construction. The pipeline would go through Native American sacred burial grounds and may impact the clean water supply in the area.

~ Protesters interrupted a Minnesota House Committee meeting regarding legislation that would allow police to charge protesters with the costs associated with the demonstration. “Among the protesters was John Thompson, friend of police shooting victim Philando Castile, who passionately argued that reps ‘should leave, because those seats you’re sitting in will be replaced by somebody who represents us.’”

~ A trend across the country to increase penalties on protesters raises free speech concerns.

~ Law professors who spoke against Jeff Sessions’s nomination were subjected to records requests. There is a line out the door of people at Jeff Sessions Senate judiciary commitee vote today.

~ NAACP activists were arrested after protesting Jess Sessions nomination for attorney general. They staged repeated sit-ins outside his office. The NAACP states in part,“Jeff Sessions’ voting record on the civil rights agenda of the NAACP while in the U.S. Senate is indicative of his disregard for many of the laws and programs for which he will be responsible for enforcing. During his tenure in the U.S. Senate, he has voted against key civil rights laws and programs such as the Hate Crimes Prevention Act, the Violence Against Women Act, and gun violence prevention initiatives. Every single year while in the U.S. Senate, Jeff Sessions has received an “F” on the NAACP’s Federal Legislative Civil Rights Report Card[.]”

~ Congress moves to give away government lands.

~ An opinion piece on what really happened at Trump’s inauguration.

~ Scientists plan a March for Science in Washington on April 22nd, which is Earth Day. Due to Trump’s war on science and denial of climate change, many scientists are planning to run for political office.

~ Last Friday, Trump signed an Executive Order banning immigrants and refugees from seven majority Muslim countries: Iraq, Iran, Syria, Yemen, Sudan, Libya and Somalia. On Saturday, there was chaos in the airports around the country and world. People were not allowed to enter the country in airports, so they were detained. Others were not allowed to board planes. Protests erupted in response.  The ACLU and other organizations had dozens of lawyers in airports helping those who were detained and their families. The ACLU sued in federal court and Judge Ann Donnelly issued a stay blocking the policy, so that nobody would be deported. The stay was not enforced. People remained detained and members of Congress were not allowed to see detainees and lawyers were sometimes not given access to clients. 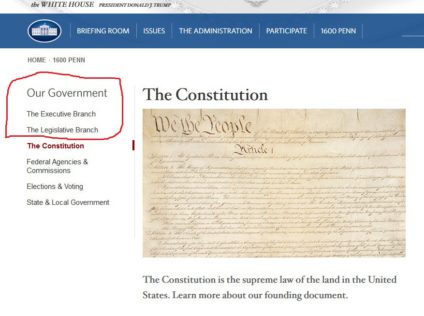 ~ For some period of time, the White House website did not have “The Judicial Branch” page under our Government. It has since been added.

~ Monday night, Attorney General Sally Yates, an Obama holdover said that she and the agency would not enforce the travel ban. Trump fired her.

~ Following Trump’s Executive Order against Muslims traveling to the United States, the ACLU raised more than $24 million dollars over the weekend. Nearly than seven times what they raised online for all of 2015. They have also gained nearly 200,000 new members.

~ The head of the African Union criticized the travel ban saying “‘The very country to which many of our people were taken as slaves during the transatlantic slave trade has now decided to ban refugees from some of our countries,’ said Nkosazana Dlamini-Zuma.”

This photo of an Eagle taking a hard look at itself is not a metaphor for anything that's been in the news recently pic.twitter.com/FLyANNUg44

~ Ethics experts and legal scholars sue Trump based on the Emoluments Clause.

~ Some articles were written about a Trump impeachment campaign and the inevitability of impeachment.

~ Drug lord “El Chapo” was extradited from Mexico to the United States.

~ Oprah will join 60 Minutes as a special contributor.

~ After a 146 year run, the Ringling Bros. and Barnum & Bailey Circus show will close forever in May. “Declining attendance combined with high operating costs, along with changing public tastes and prolonged battles with animal rights groups all contributed to its demise.”

~ Trump signed an Executive Order to facilitate the repeal of Obamacare, which is the same as the Affordable Care Act (ACA). A listing by Charles Gaba showing state by state how many people would lose their health insurance.

~ An article called Trial Balloon for a Coup? by Yonatan Zunger was trending on Twitter and causing people to think about what Trump has in store. An earlier article called What “Things Going Wrong” Can Look Like was equally as chilling.

~ The video below shows a catchy protest song from Atlanta Airport over the weekend.