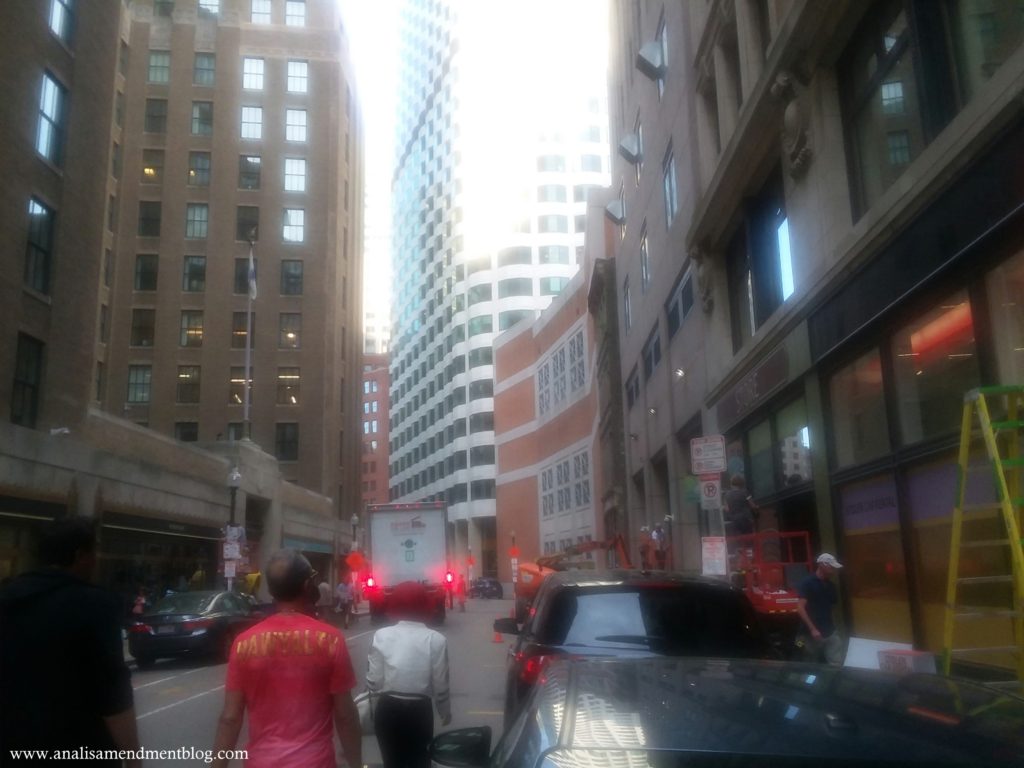 Walking through the Financial District in Boston Friday night was the same as being on a movie set. Because it was being transformed into one.

There were big black and white poster board signs all over pointing to the direction of the set, the location for the extras to wait, and where the trucks were supposed to go.

A Ryan Reynolds movie has been filming in Massachusetts for a few weeks, but it was the first time that I had seen anything related to it.

According to IMDb, “Free Guy” is set to be released next summer. In the movie, according to Wikipedia, Reynolds plays a bank teller who realizes that he is a background character in an open world video game called Free City that will soon go offline.

The plot reminds me of one of my favorite movies, Stranger Than Fiction, where Will Ferrell plays an IRS auditor who realizes that he is a character in a novel. It’s a gem of a film with a killer cast. It’s worth watching if you haven’t seen it and one of a few movies that I can’t watch enough times. It just never gets old.

I took more pictures of the set, but they are too blurry to use. One was a close-up photo of the right side of the street pictured above. A store front had the word “Store” in big letters on top. There was a picture of a blue shark with a lot of teeth looking angry painted to the left, and the words “Loan Shark” to the right. The way the stores and signs were painted, it had the feel of a cartoon.

The set was right near South Station, so after I looked around a bit, I went down to the Red Line and continued on my way home. 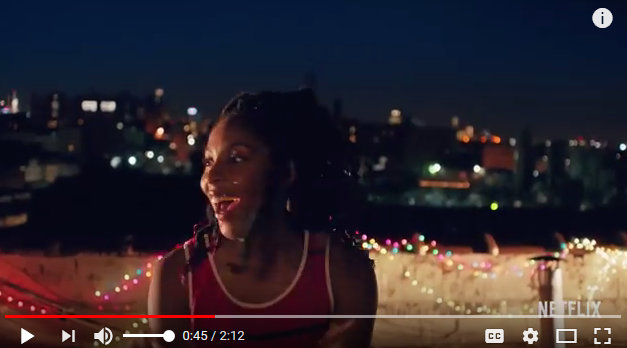 If you have Netflix and you’re looking for something to watch this holiday weekend, then I recommend The Incredible Jessica James starring Jessica Williams. I LOVED this movie! And take note that I’m not an all caps type of person.

Williams is known mostly for her role as senior correspondent on The Daily Show. I think she’s awesome. She’s funny, smart, sarcastic — black girl magic. And as she describes herself in the film, a cocoa queen.

The Incredible Jessica James is another movie that I wished existed when I was in my twenties. But I’m perfectly happy to have it now.

Overall the film is fun and lighthearted. Something to take your mind away from all the bad news in the world for an hour and a half.

The character Jessica is a quirky young woman trying to find her place in the world and get over her ex-boyfriend. Also, she is a teacher and the scenes with her students are absolutely adorable.

What else? The film is sexy, romantic, sweet and inspiring. After having watched the movie, I was left wanting way more and hope that this movie can turn into an ongoing series. I want to see what happens next! You probably will too.

I love slice of life films. A day in the life of a small group of people or just a couple — like in the “Before Sunrise,” “Before Sunset” and “Before Midnight” trilogy with Ethan Hawke and Julie Delpy. There are often separate stories, where you don’t know how they connect. Then the six degrees of separation thing happens and the intrigue builds.

“In The Morning” has that same finite period of time thing happening as the Hawke Delpy trilogy. Yet, in many ways, “In The Morning” picks up where “Love Jones” left off twenty years ago. Except for they moved east from Chicago to New York.

Until now, “Love Jones” was my only modern reference point for a relatively quiet film, about middle class black people, living in a city, talking about the nature of love and life, with soulful background music and high intensity dramatic relationships.

I guess my age is showing! Well, it’s about time that we have a new touchstone for this genre. We have waited long enough. It’s time for more layered romantic existential films about black people. Because that’s how our lives are too.

I loved this movie. The cinematography is beautiful and reveals the pulse of a neighborhood. It’s Brooklyn, but black Brooklyn. Not the white hipster Brooklyn that most only talk about now — but the people who were there decades ago and remain. The film is about regular people just living their lives. It’s quiet and yet pulls you along for the ride.

Mostly the film centers on relationships. I was immediately absorbed into the lives of these characters and drawn into their stories. I cared about them and was angry at some of them as well.

I found myself thinking about the different relationships that I’ve been in. Difficult conversations that we had. And didn’t have. When you’re in close like that. Really in deep to how the characters are feeling, you can’t help but feel too.

They talk about the nature of love and relationships and everyone has a different answer. There really is no one answer to what is love, because everyone is different. People need and want different things at certain points in their lives. We all perceive things through our own personal lens too.

The film’s ruminations on love reminded me of an article called “Memory of Color” that I just read in Kinfolk. Below is an excerpt.

In 2015, the internet went into meltdown when a photo was posted on Tumblr that showed a seemingly innocuous dress. Was it a white dress with gold trim, or dark blue with black? … The dress was, in fact, blue and black; a bluish tint to the lighting had wreaked havoc with people’s perception. But along the way it revealed two interesting things: Not only can our own perception be skewed without the necessary contextual aids, but it’s possible to look at a color and experience something entirely different from a friend. Our grasp on color becomes more tenuous still when we try to recall it by memory.

Maybe like with colors, we see and feel many shades of love. And context matters. Context shapes how we see, feel and react. It’s impossible to compare one relationship to another, because we don’t see what happens behind closed doors.

There can be no real comparison when we can’t even begin to know the truth. For two people in a relationship, it’s hard to even know the truth. Time brings change and things shift. What’s true one moment, may not be in the next.

As you can tell, the film has me thinking. I first learned about the film three years ago, but wasn’t able to see it. It was being shown at a film festival in New York and was not widely available for viewing.

I’m so glad that “In The Morning” is now available on Amazon Prime, so that more people can see it. Also, if you’re in the Newark, New Jersey area, there is a free screening of the film this Thursday, June 15th, at 6:30pm.

It’s always refreshing to see a movie about black people where the characters are nuanced and real. Seeking happiness and meaning — not just surviving.

Writer, Director and Producer Nefertite Nguvu added another dimension to how we are shown in film and I cannot wait to see more of her work. The film was truly a labor of love for her. She did two Kickstarter Campaigns to come up with the funding.

I think and hope the film will garner a wide audience, because it speaks to what many of us are wondering about and seeking. I definitely recommend that you watch it if you get the chance. There are a few ways to watch online.

Now this movie has me hoping for a sequel, because I’m wondering what happens next. And a trilogy would be even sweeter. 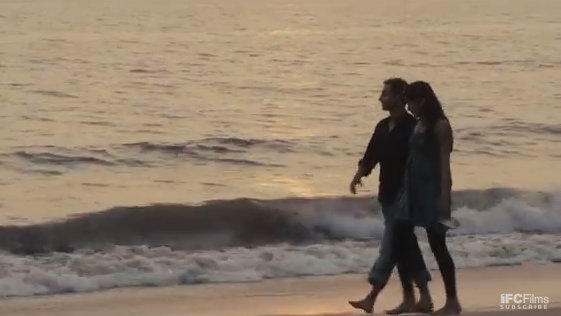 This film is intense. I happened to see the DVD at the library and picked it up. I recognized Freida Pinto and thought Trishna sounded interesting. Now I’m a fan of Riz Ahmed too.

I really enjoyed this movie and so did G. But it has some major twists that neither of us were prepared for.

This movie will lull you into complacency and happiness, then rip your heart into shreds. Trishna is very emotional film and you will get caught up quickly.

It’s a great story. The actors are stunningly beautiful. The music is wonderful. Amazing cinematography. But again. Your heart. Ripped to shreds.

I definitely recommend it, but you’ve also been warned. 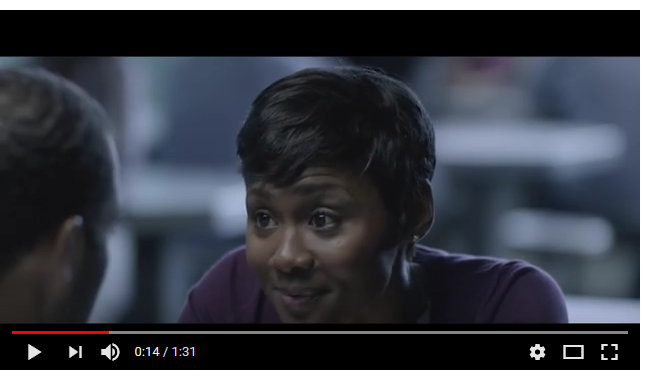 During the snow storm last week, G and I finally watched Middle of Nowhere. It’s been on my Netflix list for a while now and I’m so glad that we saw it. What a beautiful film! We both really enjoyed it. And if you’re into indie films, you’ll probably love it too. Check out the movie trailer.

The story is a simple one. A woman’s husband goes to prison and she decides to wait for him. But we see all the complexities of her life. Her job, family and hopes for the future. The characters are nuanced and the soundtrack is wonderful.

The Director is Ava DuVernay and I think this film is where I first learned of her. She won Best Director for it at the 2012 Sundance Film Festival. She also directed Selma, which I thought was amazing. I saw it when it first came out on the big screen, which doesn’t happen so much anymore.

DuVernay has become a real force in film, Hollywood and just in general. There is even an Ava DuVernay Barbie Doll!  It sold out in 17 minutes!

I’m looking forward to seeing a lot more by DuVernay in the future and I’m sure she will keep us guessing.