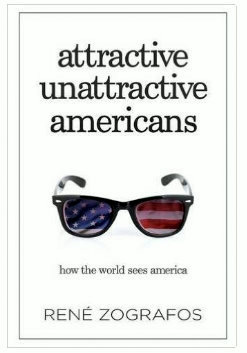 After  reading Attractive Unattractive Americans by René Zografos, I had several very strong reactions. I truly enjoyed the book and took so many notes as I was reading that I cannot possibly mention them all.

I thought it was hilarious that many people who are not American think that we are overly dramatic. OMG! How could that be?!

I don’t think I’ve have ever seen an American reality-TV show without a huge theater scene. It’s always someone who is ill, or who recently lost a family member or something else sad, and they always seem to mention that the reason they are on that particular TV show is because of them–that they want to honor their loved one or hardship. Then everyone cries and feels so sad. For people outside of America that is rather strange behavior–all these dramatic scenes on everyday television.

We can probably all agree that reality TV is rather fake, but we Americans do use a lot of superlatives and know how to hype things up.

However, the older I get, the more I also see that real life is dramatic. Between things going on in my own life and people that I know, it could be show or movie that would be so over the top that much of it would not be believed. Life is stranger than fiction.

The book has commentary about the United States written by the author, but he also interviewed people from all over the world on their views of Americans. Zografos has a very interesting background himself — half Greek and half Norwegian.

The book is fairly short and an easy read, but goes into great detail about many areas of daily American life. The topics are extensive. He talks about work life balance. How Americans work very hard, but don’t have much vacation time and often do not get to travel. He discusses issues of violence, social justice, charity, compassion, products made in America and more. Americans are described as happy and friendly, but how this sometimes comes off as fake.

This would be a great book for a book club, because so much lively discussion and debate would be generated. Especially if the group were a diverse mix of people. It would be good in the classroom too.

Since I’m all about food, I found a quote by Jaqueline from Brazil, particularly bizarre. She clearly had a very bad and limited cookie tasting experience while she was here. No doubt a World Peace Cookie never made its way into her mouth.

American cookies actually taste like plain sugar. They’re not edible for my taste. All these cookies full of sugar make me nauseous, and they must make Americans chubby.

It was interesting how Zografos did many comparisons between Americans and Norwegians. At first, I was reminded of a Norwegian Apple Cake that I baked after seeing a recipe on Tracy’s blog. She is an American expat blogger living in Norway.

So, I was quite surprised by his writing about violence in Norway and how criminals often are not prosecuted. In some ways the book may seem simplistic, with some of the short quotes and cartoons in the beginning. But when he gets going and really starts analyzing, he digs deep. This is not a superficial book. He also understands the regional quality of the United States and mentions several places.

Seattle is my number one city in the U.S., followed by San Francisco. New York City is a solid number three on my list. I enjoy nature and the sea, and New York is in many ways a nutshell of urban USA, but still with a fair amount of European influence. I must add that I have never been to Boston, although I suspect that Boston will be my very favorite when I finally do visit.

Yes, I agree with you! We have it all here in Boston! The author has such a unique perspective on so many subjects, that I was having mini-imaginary conversations with him as I was reading. I really like how he talked about the idea of the American Dream and how the process of writing the book changed him –transformed his life.

Your own journey toward your goals will itself create happiness. ~ René Zografos

I love the phrase Carpe Diem and have a necklace with the words inscribed. When I wear it, it feels like a talisman letting me more fully enjoy the present. This book is like one big Carpe Diem. The author did it and he’s telling us to as well.

As the book winds down, you can feel the author’s optimism and passion for life gearing up.

Live now. Go from words to actions; be a doer and an achiever, not only a dreamer. Dare to find your own path, because if you do, the most wonderful thing in life can and will happen to you. Some Americans already understand this and, as a result, they are living extraordinary lives. …

[A]s long as I follow my passion, I am living my dream–my American dream–and the only voice I need to listen to is my own–to what I need deep down inside. Thanks to the process and journey of writing this book, I now also feel different and more open, a better human being, almost invincible and more American, somehow. I have accomplished writing a book in a foreign language. It took me many years with small steps every day, and I made it through the storm, as I have done before. As a consequence of writing this book, it has resulted in priceless meetings with wonderful people and cultures. A true gift was given to me: I achieved happiness.

After finishing this book, the author’s words and feelings have lingered. Not only is this book about Americans, but it’s about finding that courage within ourselves to live out our dreams.