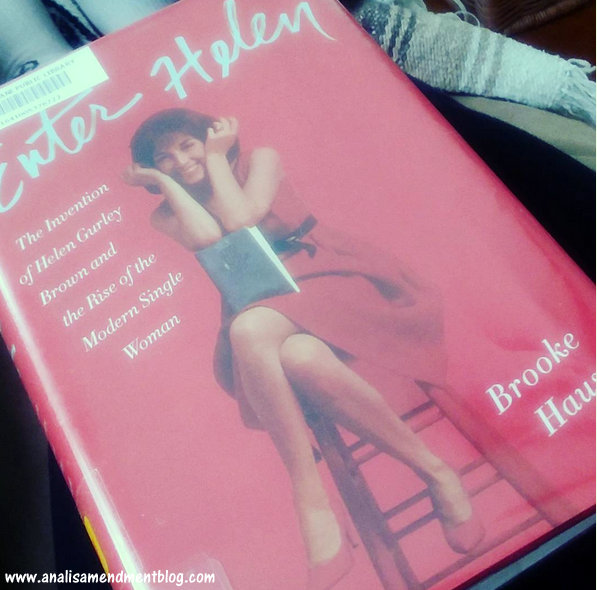 Just recently, I finished reading the book Enter Helen, by Brooke Hauser. I wanted to make sure that I wrote about it before too much time passed and I never got around to it. Which has happened with many books. Far too many books.

Enter Helen is about the life of Helen Gurley Brown, the woman who made Cosmopolitan magazine what it is today. I had no idea that before she took over Cosmo in the 1960s, it had been a literary magazine. Boy did she change it!

The magazine was suddenly all about the young single woman in the city out on the prowl looking for men. But also about fashion, style, food, work, money, travel and more. She modernized the lifestyle magazine for women after making a career for herself writing books about the same demographic. It’s impossible not to think about the appeal of Sex and the City, when reading about Brown’s life.

While Brown had never been an editor, through connections she got the job and succeeded in bringing the magazine to heights it had never seen before through a lot of hard work and determination. Sadly, it was also because she wasn’t always a stickler for the truth. Making up sources and/or compiling several people into a fictional person wasn’t a problem for her. She knew how to get advertisers and how to sell. As a freelance writer, it was especially interesting to read about the inner workings of a magazine.

By any means necessary was her motto — in my opinion in interpreting her actions. In her early life, she had no problem using sex when it got her money, work and status. She had fun and didn’t care if the man was married either. Brown didn’t consider herself pretty, but was a charmer and used her charms to get what she wanted.

Her life story is told within the context of its time. The women’s movement is the backdrop of much of the book, along with commentary by Gloria Steinem. Brown and Steinem had a complicated relationship fraught with tension based on their different takes on how women should “be” in the world.

It was quite interesting to read and surprising to see how their careers and lives crossed. Steinem did freelance writing for Cosmo and even appeared as a model. They were so different, yet had so much in common. Especially with Steinem co-founding Ms. Magazine. Quite interesting to note that both of these magazines are still around, when so many magazines go out of business.

After reading the book, there are many things that I don’t like about Brown. But I have to respect her and her accomplishments. Enter Helen is well written and researched — a truly fascinating read. I highly recommend it. A great book to add to your summer reading list!