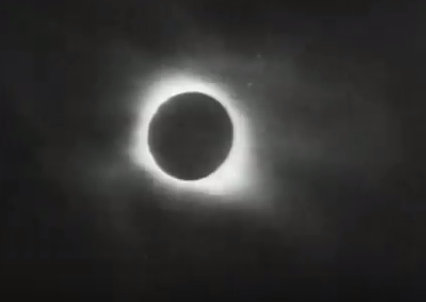 Are you excited about the total solar eclipse today? I am! Unfortunately I don’t have glasses, but I’m hoping to enjoy the event anyway.

Also, today I learned that my family has eclipse history. Who knew?

My aunt found a clipping from her aunt’s scrapbook with a portion of a poem called “The Total Eclipse Of The Sun Of Two Centuries Ago.”

However, with some further digging it seems that because of changes with the calendar that the date of this total solar eclipse, called Halley’s Eclipse, may have actually been on May 3, 1715. Below is portion of the article from The Guardian.

[A] total solar eclipse was visible across a broad band of England. It was the first to be predicted on the basis of the Newtonian theory of universal gravitation, its path mapped clearly and advertised widely in advance. Visible in locations such as London and Cambridge, both astronomical experts and the public were able to see the phenomena and be impressed by the predictive power of the new astronomy.

So this 1715 eclipse was special. It was predicted based on recent scientific developments and the public was ready and waiting to see the spectacular sight. Ramsay, who was about 29 years old at the time, must have been deeply moved by the eclipse, because his poem is quite epic.

Below is a portion, edited for length. See the full poem here.

Now do I press among the learned throng,
To tell a great eclipse in little song.
At me nor scheme nor demonstration ask,
That is our Gregory’s or fam’d Halley’s task;
‘Tis they who are conversant with each star,
We know how planets planets’ rays debar;
…
When night’s pale queen, in her oft changed way,
Will intercept in direct line his ray,
And make black night usurp the throne of day.
The curious will attend that hour with care,
And wish no clouds may hover in the air,
To dark the medium, and obstruct from sight
The gradual motion and decay of light;
Whilst thoughtless fools will view the water-pail,
To see which of the planets will prevail;
For then they think the sun and moon make war,
Thus nurses’ tales oft-times the judgment mar.
When this strange darkness overshades the plains …

What’s especially fascinating about the clipping of this poem, besides the coffee stains, is that my great aunt wrote on it. She wrote that on August 31,1932, she and two of her sisters stood together on Tremont Street in downtown Boston at St. Paul’s Cathedral across from the Park Street T station to view the eclipse.

I’m assuming that they had glasses, because none of them lost their vision from what I know. This story is new to me and gives me some insight into my great aunts’ lives that I didn’t have before. They were really into the eclipse!

Also, my mother pointed out that the names mentioned did not include my grandmother. So now I wonder. Where was my grandmother? And why wasn’t she with her sisters?

As someone who is very much into the idea of time travel, this also makes me think about how I have an approximate time, date and place to go back to to meet some family members!

An article from Science Magazine says that the 1932 total solar eclipse was a path about 100 miles wide that included New England, so they had the real deal, unlike what we will have here in New England later today.

The picture above is from a short video that I found showing the preparation for and actual video from the 1932 eclipse. Today will be full of wonder and no doubt will be history for those looking back at this someday.

Hope you have a wonderful day and Happy Solar Eclipse!