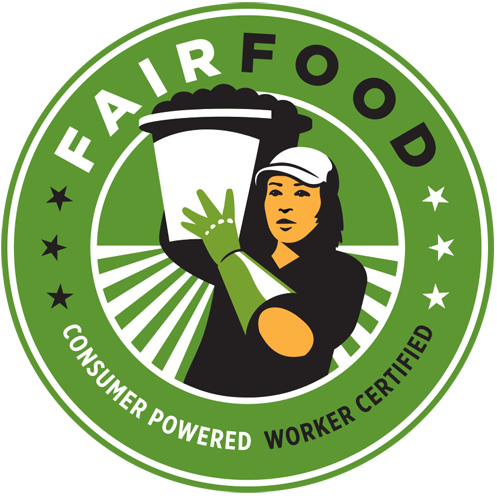 Over the past couple of years, I’ve written about the Coalition of Immokalee Workers (CIW) and their work to improve the lives of those who harvest tomatoes. If we haven’t grown the tomatoes ourselves, it’s likely that many of the tomatoes we eat come from Immokalee, Florida, where the workers have organized for more humane working conditions.

If you follow me on Twitter, you may also have seen some of my recent tweets about the CIW. Just last month, they received the Clinton Global Citizen Award. The award was established in 2007 for those who take President Bill Clinton’s call to action. It honors “outstanding individuals who exemplify global citizenship through their vision and leadership.”

The new Fair Food label pictured above was created by the CIW, so that we consumers can look for it in the grocery store and when we eat out at restaurants.  Below is an excerpt from the press release.

The label will be available to all grocery stores and restaurants that participate in the Fair Food Program. Participants in the Program pay a small premium when they buy Florida tomatoes, with the premium going to increase wages for farmworkers. They also commit to a worker-created Code of Conduct to ensure safe working conditions and prevent forced labor, sexual harassment and child labor in the fields. The Fair Food Program has been called “the best workplace monitoring program in the US,” in the New York Times and “one of the great human rights success stories of our day,” in the Washington Post.

“We have waited nearly five years before revealing this label to the world today,” said Cruz Salucio of the CIW.  “Over those years, we have been doing the hard, day-by-day work of building the Fair Food Program in Florida’s fields — educating workers about their rights, investigating complaints, and identifying and eliminating bad actors and bad practices — so that today we can stand behind the fair conditions and effective monitoring process that this label represents,” continued Salucio.  “We couldn’t be more proud of this label. It symbolizes the new day for workers in agriculture that we, as farmworkers and in partnership with consumers across the country, have fought so hard to make real.”

Whole Foods and Compass Brands, a major presence on university campuses, will be the first members of the Fair Food Program to display the label in their stores and dining facilities.

In addition to looking for the label, also be on the lookout for Food Chains, a documentary film that chronicles the CIW’s Campaign for Fair Food. Executive Produced by Eva Longoria (Desperate Housewives), Eric Schlosser (Food Inc, Fast Food Nation) and narrated by Forest Whitaker, the film will be in theaters in just a few weeks on November 21, 2014. Here’s the film trailer below.