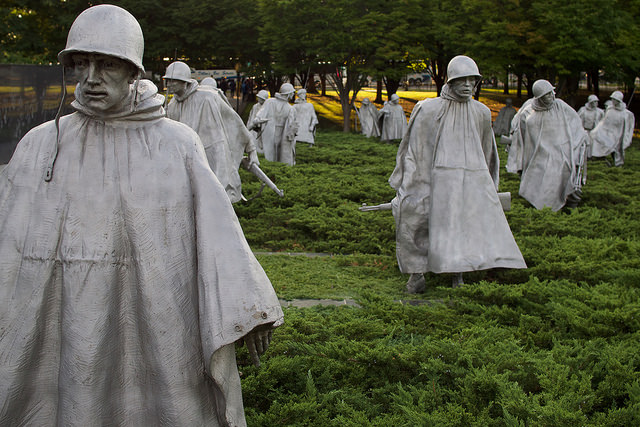 Unfortunately, a small and dwindling group of Korean War veterans in Massachusetts has largely been forgotten as well.

In April 1996, Governor Weld signed legislation allowing veterans still working in the public sector of the state to purchase up to four years of their military service toward their creditable service for retirement. The bill officially became law in July 1996 and affected all those who retired on or after that date.

However, the law leaves out veterans who retired prior to July 1996. Their military service has not been credited toward their retirement benefits. Many of these veterans who have been left out are retired public school teachers. Talk about serving your country!

In January 2001, Representative Edward Connolly filed the first bill at the request of a retirement group, to bring this benefit to those who were retired at the time the bill went into effect. Similar legislation has been filed over the years since then to rectify this oversight. However, none of the legislation has passed.

Marie Ardito, who was profiled in the New York Times, has been a tireless advocate for this group and is 120% dedicated to see this legislation become law. As the Information Coordinator for Massachusetts Retirees United, a nonprofit group, she has been informing the membership about the status of the legislation and working for years to push it forward. Ardito explains how the number of eligible veterans is decreasing.

At the beginning of 2011, we asked the Massachusetts Teachers’ Retirement System how many veterans they had listed who had retired prior to April 1996 … They gave us 674 names. Within a 10 month period, of receiving the 674 names given by the MTRS, 17 died or 2.5%.

As of November 20, 2014, the number given to us from the Massachusetts Teachers’ Retirement System that were eligible for the bill was 454.

Bill H.3146 was filed by Representative James Miceli at the beginning of the current legislative session. On August 26th there was a hearing. But more must be done to make this bill a law. Call or email your state representatives and your state senators to tell them you are in favor of this legislation.

As time goes by, more of these veterans die without receiving benefits that they are entitled to. A 1997 Massachusetts Superior Court decision said that these veterans could not be excluded.

In full disclosure, I learned about this issue, because my father is one of the surviving 454. When he told me, I was so surprised. How could this be? But it is. I think Ardito says it best.

As one ages it becomes important that others value the way you spent your life. So many of those who served and were left behind with the original bill said the thing that matters more than the money is that the service they gave to our country is recognized.

Please, let them see that you listened, you heard, and you acted for them! Please vote H3146 favorably out of the Veterans and Federal Affairs Committee.

The average increase would be about $150 a month— I think the sacrifices they made and the service they rendered to this country is worth at least that amount.

I  am aiming to get this out of committee ASAP as it will be 20 years on July 24, 2016 that they were left behind and 20 years is a long time to have one’s service recognized!

As you think about Veterans Day and how you can pay homage to those who served, helping to get this law passed would be a wonderful start.