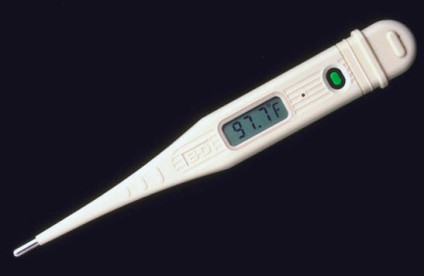 Quick! Do you know what your body temperature is?

If not, grab a thermometer. If you’re feeling healthy and assumed it was 98.6 degrees, you might be surprised.

If you’re staying healthy by eating well and exercising, you’re probably familiar with your blood pressure numbers. For those who are more athletic, you might even take your pulse before and after a workout. But many of us may not know our normal body temperature. But I think we should. Braithwaite seems to agree.

Knowing your basal body temperature is empowering. The individual is made aware of a fundamental body function which is to maintain body heat under a wide range of conditions. It gives useful clues to when things are changing in expected as well as unexpected ways. A classic example is using basal body temperature fluctuation to predict ovulation and fertility.

The temperature of 98.6 degrees that we grew up learning as normal is actually an average of the range of human body temperatures (96.8 – 100.4 degrees) according to Dr. Ejiro Eduvie, who practices Emergency Medicine in New Jersey.

If you’re generally a healthy person, unless your temperature is below 95 or over 101, you’re probably okay. Braithwaite adds that the “set point” varies from person to person. The experience of cold or hot initiates a thermoregulatory response through our own internal “thermostat” called the hypothalamus.

Eduvie elaborates. “For example, when you are hypothermic due to the environment. Your body will naturally try to conserve heat by shivering and vasoconstriction of your vessels. When these mechanisms cannot keep up with your heat loss, you will feel cold.”

While our bodies can become too cold, generally our concern is getting too hot. Hyperthermia is elevated body temperature where the increase is out of control and the body can no longer loose the excess heat.

Braithwaite gives examples of military recruits, marathon runners and summertime roofers performing heavy activity in hot weather. They can end up with heat exhaustion and heat stroke, which is a medical emergency.

At temperatures above 105 degrees the brain literally starts to cook. This degree of temperature elevation can also be caused by a reaction to certain pharmaceuticals or even recreational drugs like cocaine, PCP or ecstasy, which cause increased muscle activity.

He recalls an elderly patient that had been admitted to the hospital with a temperature of 108 degrees after passing out in a car during the heat of summer. Surprisingly, the patient survived.

Probably the more common way that we see a high body temperature is due to a fever. After the Ebola scare last fall, depending upon the places where people traveled, they were subject to having their temperature taken by airport security. An elevated temperature caused concern and fear.

You Give Me Fever 🌡️

Fever itself is not a disease. It’s a sign and symptom of an underlying condition. Eduvie says that if you have a fever, you should also notice how you are feeling overall. This reminds me of group meditations where we are told to take a quick scan of our body.

Are there other symptoms? If you have altered mental status, severe headache, neck stiffness, seizures, shortness of breath, chest pain, or decreased urinary output, you should go the emergency room.

She also advises to seek medical attention if you have a high grade fever of 103 – 104 degrees. If you have a persistent fever that you cannot get under control after taking over the counter medications like acetaminophen or ibuprofen, then you should also see a medical professional.

Just one last thing about body temperature. Why does it often seem that women often feel colder than men? Many of us may have struggled with this issue at work. Yes, folks. The struggle is real and it’s personal.

Braithwaite says that women generally have lower blood counts (hemoglobin content) than men and also have less muscle mass, which could cause women to feel colder. But then he adds that women have a higher percentage of body fat, especially skin fat, so we should be more insulated.

Still no smoking gun. That answer remains a mystery. And I know to always bring a warm sweater to work.