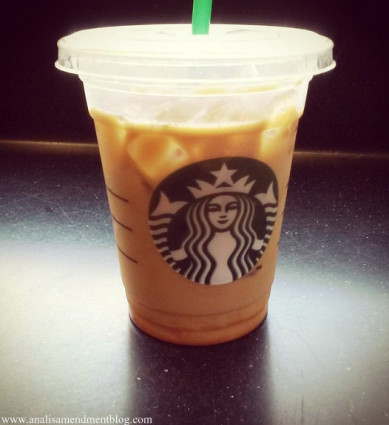 My favorite Starbucks Reward is my free birthday drink.

Outside of that, I can’t be bothered with how many stars I’m going to earn for buying this or that.

I really like pumpkin spice. Since the weather was quite warm on the day I decided to get my drink, I enjoyed an iced pumpkin spice latte with soy milk. It was heavenly.

I’ve written about how it is so strange to me that the seasonal conversation about pumpkin spice centers around it being a thing for white people.

A recent blog post about pumpkin spice on Black Girl Dangerous gets to the heart of matter about how this conversation has seriously twisted the truth. It really makes me think about how for many years, as a person of color, I was made to feel strange for enjoying pumpkin spice.

The writer of the post, Sasanka Jinadasa, a Sri Lankan American, gives us a short history of the ingredients that make up pumpkin spice: cinnamon, ginger, cloves, nutmeg, allspice.

Below is a taste of her post, but I hope that you’ll click over and read the entire thing and learn why she wants to #decolonizepumpkinspice.

Sri Lankans are proud of their cinnamon, a natural crop with a violent history, in which Portuguese traders, Dutch “allies,” and British colonists used a combination of guns and debt to monopolize the cinnamon trade in my parents’ homeland. …

As for pumpkin? A squash native to the Americas? Who do you think grew that first, the Pilgrims? Think just a little further back. …

It’s not pumpkin or pumpkin spice that’s the problem; it’s the commodification of our resources as somehow exotic when used in non-white foods and comfort when used in white foods. And when we mock certain foods as “white foods,” particularly in America, we’re capitulating to a lie—the lie that anything we eat in the diaspora isn’t touched and flavored by people of color.