Let the record show, that on the evening of November 18, 2016, notorious and hateful Vice President-elect Mike Pence was booed by a crowd. He did not move the crowd. He did not sway it. He was booed by it. Much social media posting of the events did ensue. And said booing made me feel better than I have since our most awful election day. History was made.

As you can see, I have been absent from this space since the night before and unable to write except for many angry tweets, retweets and Facebook posts. I have been devastated, fearful, sad and angry. Probably too many emotions than is healthy to feel all at once. But that’s the state of our nation today.

If I look at it from a distance. It’s quite interesting. Someone with the tendencies and temperament of an angry dictator, with no government experience was elected to the presidency of the United States. It makes me feel that anything is possible. There is no stopping anyone from doing anything. Any random person could just become a brain surgeon tomorrow. No experience needed. No rationale. Literally anything can happen anywhere anytime. I could win the lottery. Or aliens could kidnap me. That’s the world we are living in.

Now I don’t want this post to get too long, because it could turn into a rambling mess. Maybe it already is. But writing is my therapy and I need to get out at least some of my feelings about this fiasco of an election.

The booing of Pence happened at “Hamilton,” the musical sensation playing on Broadway. I don’t even understand why he would want to be there. Based on what he and our President-elect stand for, they despise and disrespect most people in the cast (women, people of color, LGBTQ).

Their past statements, actions, choice of Cabinet members and what I know of history, makes me believe that they plan to do great harm to those of us who are members of these communities. Among many other things, David Duke is happy as a clam with the election results. The Klan endorsed them and plans a victory parade. That is not normal or good to say the least. The Klan is a terrorist organization. Trump has not taken a real stand denouncing them or trying to quell the dramatic increase in hate crimes since his election. He merely said to “stop it” on a 60 Minutes interview.

Remember President Obama had to make a long speech denouncing the pastor of his church and ended up leaving his church? Trump questioned his citizenship and disrespected him for his entire Presidency. So much is wrong about this.

Trump’s team has been discussing a Muslim registry and how Korematsu allows it. The case dealt with the interment of Japanese-Americans in the United States during World War II. After reading the case in law school, I remember being shocked learning that the case still stands and has not been overturned.

The internment of Americans on American soil could still happen. Make not mistake. This is a real threat. It may look slightly different than before, but there needs to be a greater awareness and discussion of the dangers of a Trump administration. People say that Trump exaggerates and doesn’t mean what he says. Over decades, Trump has shown us who he is. People should believe him. Remember the quote by Maya Angelou?

When someone shows you who they are believe them; the first time.

A New York Times article from 1922 discusses Hitler. Here is an excerpt.

But several reliable, well-informed sources confirmed the idea that Hitler’s anti-Semitism was not so genuine or violent as it sounded, and that he was merely using anti-Semitic propaganda as a bait to catch masses of followers and keep them aroused, enthusiastic, and in line for the time when his organization is perfected and sufficiently powerful to be employed effectively for political purposes.

A sophisticated politician credited Hitler with peculiar political cleverness for laying emphasis and over-emphasis on anti-Semitism, saying: “You can’t expect the masses to understand or appreciate your finer real aims. You must feed the masses with cruder morsels and ideas like anti-Semitism. It would be politically all wrong to tell them the truth about where you really are leading them.”

I read an article recently about someone who voted for Trump. The woman said that she felt bad for people of color and the LGBTQ community, but she thought that things would be better for her. This was really scary. She sensed danger for other people, but looked the other way because it wasn’t a problem for her. Although there is, because she is a woman, but she doesn’t seem to understand misogyny.

That is how people get taken away and disappeared.When neighbors look the other way. In Germany and here. And in other countries with dictators. I look at what is happening around us and feel that so many people are sheep and have learned nothing from history. They are following along and ignoring what is being said right to our faces. The people that Trump says he admires are dictators. I believe we are in danger of losing our democracy.

I remember when I was sworn in as an attorney. I don’t remember the exact words, but I swore an allegiance both to the Constitution of Massachusetts and the Constitution of the United States. The enormity of those words resonated very strongly with me. I felt proud and quite patriotic in that moment. I believe in this country. In the Constitution.

In law school, we always had pocket guides to the Constitution, but I hadn’t had one in years. When the ACLU was giving away free pocket guides after Khizr Khan’s speech, I got one. I have been thinking about it a lot. 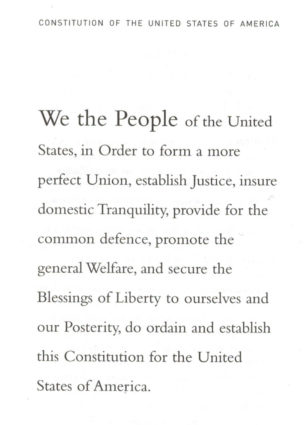 About what it allows in the face of a monster being elected President. What is the recourse within the law? What does history show us?

“Hamilton” could not have come along at a better time. Maybe it will help some to think about history more.

At the end of the show, Brandon Victor Dixon, who plays Aaron Burr, read a statement addressing Pence. The New York Times reported that the show’s creator Lin-Manuel Miranda and others involved with the show wrote the statement. Here’s part of the statement.

We, sir — we — are the diverse America who are alarmed and anxious that your new administration will not protect us, our planet, our children, our parents, or defend us and uphold our inalienable rights,” he said. “We truly hope that this show has inspired you to uphold our American values and to work on behalf of all of us.

The Theater must always be a safe and special place.The cast of Hamilton was very rude last night to a very good man, Mike Pence. Apologize!

Many of us have legitimate fears about his Presidency. He has not apologized about the Klan, Bannon or many other things that he could apologize for. He has not tried to ease our concerns or make us feel safe. When we tell him that we feel unsafe, he tells us to apologize! This man is irrational and ignorant.

I learned about booing incident last night right after leaving a production of Miranda’s first hit play. “In the Heights” was performed at Berklee Performance Center. I loved it! There was also an interesting reaction to the election during and after this performance. Here are part of the lyrics to the song “96,000.”

Yo
If I won the lotto tomorrow
Well I know I wouldn’t bother goin’ on no spendin’ spree
I pick a business school and pay the entrance fee!
Then maybe if you’re lucky
You’ll stay friends with me!
I’ll be a businessman, richer than Nina’s daddy!
Donald Trump and I on the links and he’s my caddy!
My money’s makin’ money, I’m goin’ from po’ to mo’ dough!
Keep the bling, I want the brass ring, like Frodo!

There was an audible gasp in the audience with Trump’s name mentioned. Then Trump’s name was mentioned a second time and everyone cheered. Because there was what appeared to be an appropriate ad lib. I couldn’t hear it, but it appeared to be around the lyrics, “Politicians be hatin’  Racism in this nation’s gone from latent to blatant.”

Then there was an extra song at the end of the show and discussion about how rehearsal on the night of the election was so difficult for the cast members. Everyone was grieving. And I still am too.

The only thing giving me hope is that people are out protesting and the possibility of a game changer by the Electoral College. The Electors don’t vote until December 19th. One month from today.

Many may have heard of the Change.org Petition to the Electoral College Electors. At the time of this writing, it is 21,916 signatures shy of the 4,500,000 needed. The goal is to make Hillary Clinton President with their votes. One of the reasons being that she won the popular vote.

The Electors votes are the final determination of who is President and Vice President according to Article II, Section 1 of the Constitution.

There is also a group of Electors, calling themselves the Hamilton Electors who are now coming together to try and save our country.  Seriously, this is all I am hanging on to. One of these scenarios.