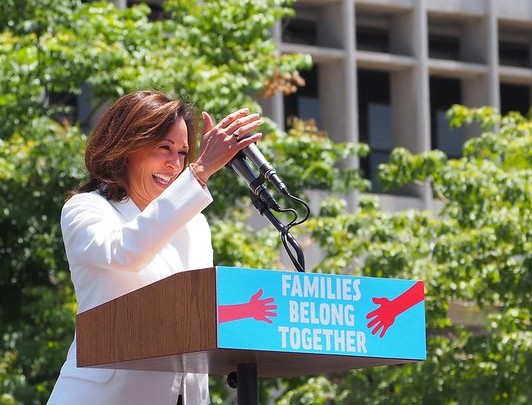 2020 will never be remembered as an easy year. Nor one of the happiest. It certainly isn’t a boring one though. My mom said that Kamala Harris’s nomination for Vice President is one of the most exciting things to happen in a long time. My mom is an AKA, just like Harris, so they are sorority sisters for life.

Growing up, I always knew that my mother was part of the Alpha Kappa Alpha Sorority and that pink and green were the colors. Two of her best friends, my godmother and my brother’s godmother are also her sorors and they are all thrilled.

While I never pledged to a sorority myself, being part of the AKA sisterhood has been part of my mother’s identity for as long as I can remember. With nearly 300,000 members, Harris has a powerful force standing behind her and financially supporting the campaign as well. Founded in 1908, that number is significant to the organization.

It’s not surprising, that soon after Harris became Biden’s running mate, thousands of donations in the amount of $19.08 showed up. According a Washington Post article, more than 14,000 of these donations poured in, adding up to more than a quarter million dollars. And the money keeps coming in.

While you may see women dressed in pink and green at some campaign events, you won’t see any AKA symbols, says a Richmond Free Press article. Also, don’t look to see an endorsement of Biden and Harris. As a tax-exempt nonprofit entity, there are limits to their allowed political activity. Keeping their tax-exempt status requires compliance with IRS regulations. Non-partisan voter education drives are generally okay, but not much more than that.

The debate between Pence and Harris is tomorrow and I’ve been looking forward to it. However, given what’s going on with the spread of the virus around the White House, I’m a bit nervous. Pence was at the superspreader event, so he really should be in quarantine and not out and about. Apparently they will be separated by plexiglass, so that hopefully will make the event much safer.

Every day appears stranger than the last. I cannot even imagine the drama that tomorrow’s debate will bring.