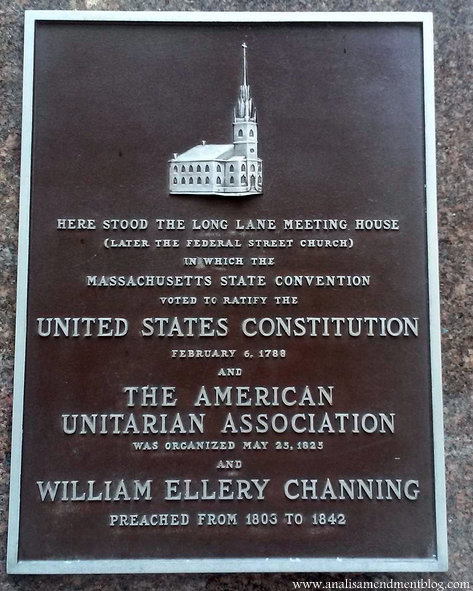 Walking to work yesterday, I noticed this new plaque on the corner of the Bank of America building where Franklin Street and Federal Street intersect. I think it’s new. Or maybe I just never noticed it. Not quite sure.

Either way, the plaque is quite small and easy to miss. But has a lot of information. The spot was once the location of the Federal Street Church, where the Massachusetts State Convention voted to ratify the United States Constitution. Below is a quote from the Massachusetts Historical Society about the event.

Massachusetts had the largest convention of any state, and a fundamental disagreement divided the 364 delegates: Federalists supported a strong central government and the Constitution as written; Anti-Federalists held that a centralized government would concentrate power in the hands of the elite and lead to the dissolution of the democratic ideals espoused during the Revolution. The turning point in the debate in Boston came when Gov. John Hancock proposed that Massachusetts recommend several amendments to the Constitution, including a Bill of Rights. This proposal effectively gave voice to many of the Anti-Federalist concerns, and after Revolutionary leader Samuel Adams spoke in favor of Hancock’s “conciliatory proposition,” a sufficient number of delegates shifted their positions to approve ratification. Massachusetts ratified the United States Constitution on February 6, 1788, by a vote of 187 to 168.

With Hamilton being all the rage and the 4th of July just a few days ago, many of us are thinking about history. But my heart is breaking over the history being made.

More police shootings. Philando Castile was killed last night and the 561st person shot by a police officer in the United States this year. It has to stop. This country is at a turning point. And I really hope we will turn toward the right side of history.