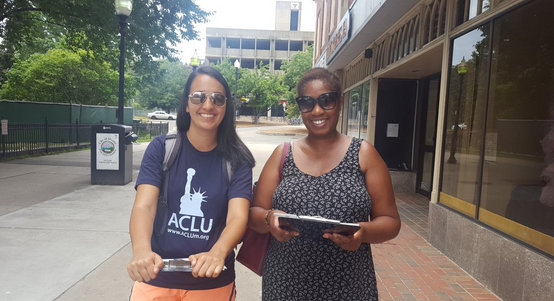 Since the election, I’ve been trying to find ways to resist and fight this current administration. Some of it has been by blogging about it here. Amplifying other voices on Twitter. Contacting my elected representatives. Donating to causes that I believe in.

I have not been to any protests though — even though there have been many. Many people who know me and are aware of my political activism are shocked by this and assume I’m out there. Sometimes it makes me feel guilty.

Like many others, I have a lot on my plate and am aware of how much I can handle at a time. An article called 12 Ways You Can Be an Activist Without Going to a Protest gives some doable options for those of us who because of time and other factors, like being an introvert, choose not to be in huge crowds.

As the article states and I believe, we can resist in different ways. Sometimes smaller and quieter ways. But we can all have a positive impact.

Back in July, I volunteered for the ACLU of Massachusetts by canvassing in Quincy. Another volunteer and I stood outside the library and asked people to sign postcards supporting the ACLU Freedom Agenda.

It was one of the hottest days of the summer and we were melting, so we weren’t out that long, but we received positive and enthusiastic responses. Many people signed the postcards and were thrilled that we were there. One woman even hugged me, thanking me for doing this work!

Of course, there were some who were not fans of the ACLU and were supportive of Trump. It was to be expected. Quincy has a fair number of Republicans. During the campaign, I remember seeing several  Trump signs on lawns and MAGA bumper stickers on , usually trucks. They still make me shudder every time I see them. 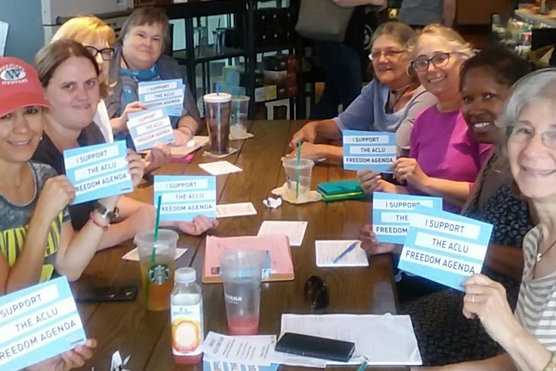 After we finished getting our signed postcards, we met with several other Quincy residents to share information. The postcards will be sent to Massachusetts legislators to let them know the priorities and beliefs of their constituents.

If you’re wondering about the ACLU Freedom Agenda, here’s some information below that ACLU of Massachusetts Volunteer Coordinator Olivia Santoro would like you to know.

Donald Trump said many things during the campaign that raised serious constitutional concerns. Mass deportation, restricting reproductive freedom, persecution of Muslims, weakening the press, etc. We think we have a special responsibility—and opportunity—right here in Massachusetts.

Our federal system permits state constitutions to be more protective of human rights than the federal constitution. So we’ve put together a “Massachusetts Freedom Agenda” that lays out ways that Massachusetts can do this.

Reproductive freedom
The Massachusetts constitution made possible our Moe victory in 1981, protecting state-funded Medicaid coverage for abortion despite laws denying federal funding. We need to ensure that access to contraception in Massachusetts remains consistent and affordable in anticipation of attacks against the Affordable Care Act.

Immigrants’ rights
Several cities and towns have passed Trust Acts (which restrict local cooperation with federal deportation efforts) — Amherst, Boston, Cambridge, Holyoke, Lawrence Northampton, Somerville. We need to defend and expand these protections, and ensure that state and local authorities do not participate in federal immigration enforcement, raids and roundups.

We also need to protect the “dreamers”—the young people who immigrated to this country as minors, and who the bi-partisan federal “DREAM Act” aims to protect—to make sure young people are able to safely and fully participate in American life.

Religious freedom
In a similar way, we need to begin working now to restrict local cooperation with any federal efforts to persecute Muslims or other groups.

Privacy and free speech
Especially in Massachusetts, with its centers for education and our high-tech economy, we need to update laws to keep pace with technology, preserving the First and Fourth Amendments in the digital age.

That means updating search and seizure laws, and set clear limits on collecting and sharing information about First Amendment-protected activities (speech, associations, and religious affiliation). We also need to strengthen the right to dissent and speak out.

If you live on the South Shore and would like to become involved, there will be a meeting to discuss the Freedom Agenda on Saturday, September 16th at 1pm.

Another way to become involved is by attending ACLU Lobby Day at the Massachusetts State House on Wednesday, September 27th.

Click here for registration information. If you register in advance, there will be a boxed lunch. A free lunch! Check out the event on Facebook too.

Registration opens at 9:3am. The program starts at 10:30am and continues through the afternoon.

Can’t attend either of these events, but still want to be involved? You can still support the Freedom Agenda by telling your legislator online. Click here.

Hopefully you can find a way to get involved that works with your schedule and comfort level. All of us are needed at this vital turning point in our country’s history!

Yesterday, I attended the meeting in Quincy mentioned above. There were around 30 people, all from different parts of the South Shore, including Quincy.

The key takeaway from the meeting was for us to take action. Gavi Wolf spoke about how just a few people can make a big difference when we speak to our legislators. We voted them in and they want to continue to get our votes.

We formed small groups based on our common state Representatives. I found this discussion quite interesting. He said that because Massachusetts is such a Democrat heavy state, many legislators who would be considered Republicans in other states, run as Democrats here, because they think that is the only way they will get elected.

What I’ve long suspected! Based on the conservative stance and policy of some, they are Democrat in name only.

Because of this disconnect between party and policy, we have many conservative Representatives who are “Democrats” and the focus now is to lobby them and let them know how their constituents feel about certain issues.

Those of us who were at the meeting will be contacting our legislators and hopefully meeting them in person to discuss the Freedom Agenda.

After tweeting about the meeting, I received an email from someone who is interested in getting involved. Please feel free to reach out to me with any questions. Stay tuned!