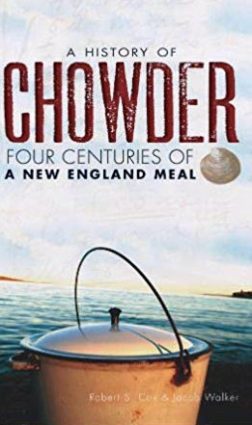 While I haven’t done any chowder tastings lately, I did read a book about its history.

A History Of Chowder is a tiny, tiny book that dives deeply into all things chowder.

Maybe that’s true. But does it matter? Is the comparison even fair? Chowder is a comfort food that reminds us New Englanders of home.

The book says that it’s not clear who created the first bowl of chowder, but does provide the earliest published chowder recipe.

Dated September 23, 1751, it’s actually a rhyming poem! Below is part of the recipe.

First lay some Onions to keep the Pork from burning,
Because in chouder there can be no turning;
Then lay some Pork in slices very thin,
This you in Chouder always must begin.
Next lay some Fish oer crossways very nice
Then season well with Pepper, Salt and Spice;

Because chowder began as a soup made at sea, it was first considered to be a masculine food. It was made by men, for men and consumed with rough manners. While this makes sense, I had never thought of chowder that way.

As different ingredients are added to chowder over time, it changes and who eats it expands. Regional variance also start happening — particularly the addition of milk and cream by some and the addition of tomatoes by others. It seems like New York and Boston never agree on anything!

A good portion of the book also analyzes how chowder ingredients are intertwined with the colonial past of this country. History brings its remnants forward. And the next time I do partake in a bowl of chowder, I will see it in a bit of a different light.