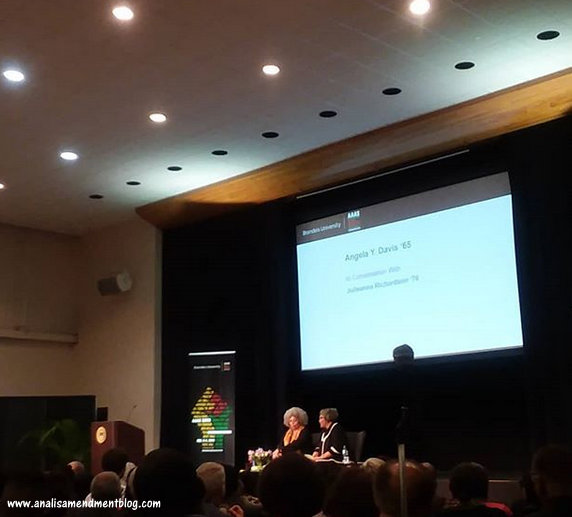 On Friday, February 8th, Angela Davis returned to Brandeis University. My aunt and I are both alums, and were thrilled to see her speak at the 50th Anniversary Celebration of the Department of African and African-American Studies.

If you haven’t seen Angela Davis speak in person, go see her while you have the chance. She is 75 years old, and a living legend with much to teach us all. I will definitely be reading her autobiography soon.

Hearing her talk about her life, I realized that much of what many of us think we know about her is not true. There is “an idea” of her out in the ether – the mythology of a violent militant angry Black communist woman with a big afro who was a member of the Black Panther Party. A stereotype that was attributed to Michelle Obama and to many other Black women generally.

Based on this idea, I had always assumed that she had been part of the student takeover of Ford Hall in 1969. She actually graduated in 1965. She was long gone when the takeover happened! Her studies at Brandeis focused on French and Philosophy.

I was fascinated to learn a while back that one of the biggest impacts that the Black Panthers have had on American society is free breakfast for school children.

I could have listened to Davis speak for hours more and hope to see her speak again. It was so interesting hearing the influence that she has had on decades of Black Brandeis alumni. So many people in the audience stood up and told her that they decided to attend Brandeis after learning that is where she graduated from.

There definitely is a certain amount of pride to be associated with the same school that she attended. To see her during Black History Month at this time in history was especially poignant. What a gift.

If you’d like to see the video from the event, you can watch it online.